Deploy Your Applications and Components Using the Windows Installer

Whenever you hear about deployment of your application or component, you get scared of the traditional scripted setup programs. The main goal of this article is to help .NET programmers get used to this easy-to-setup program that allows you to deploy your application even if you don’t know how to write the setup script. Microsoft Dot NET Setup Deployment will make the setup for you with a few simple clicks. It is also provided with self-taught, easy driven wizards. Many programmers who are using Microsoft Visual Studio Dot NET are not fully aware of this Windows installer that comes with Visual Studio; they are going for other setup programs that need hard scripting knowledge. Using Windows Installer is very easy.

Windows Installer enables you to deploy your applications and components in an efficient manner. The installer provides new capabilities to advertise features without installing them, to install products on demand, and to add user customizations. Windows Installer is an installation and configuration service that reduces the total cost of ownership. The installer enables customers to better address corporate deployment and provide a standard format for component management.

This technology is available as a redistributable for Windows Installer version 2.0, from the SDK Update site.

In addition, a Setup Wizard is provided to help step you through the process of creating deployment projects.

Note: If you have created a standard deployment project and later decide to deploy it to a web, you will need to create a new project.

Open the Visual Studio IDE and select File->New->Setup and Deployment Projects. Select the Setup Wizard. Give the file name and location where to store that project, as shown in the following figure. 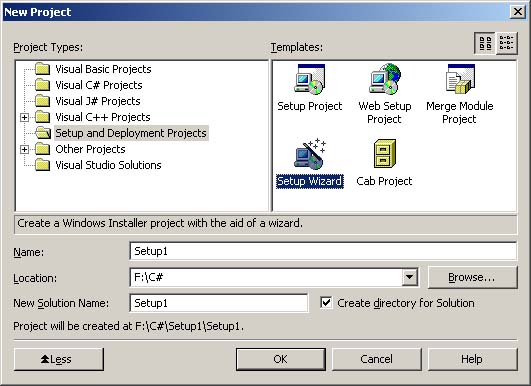 The Welcome to Setup Project Wizard dialog box will appear. It is a simple four-step wizard. Click the Next Button. The second step will ask the type of the setup. Choose the appropriate reply; here I have chosen setup for Windows application. Click Next. 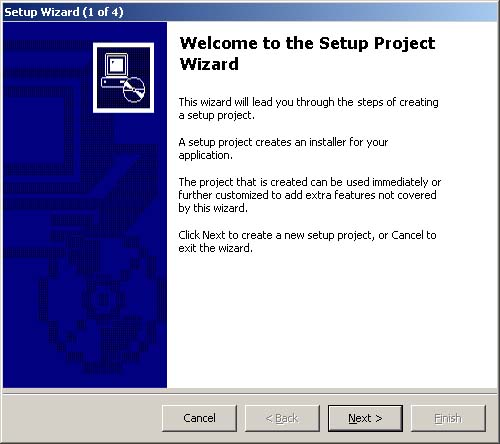 The third step of this wizard will ask you to add your developed application or component and other files that you need to place in the clients machine; for example, say, documentation files. 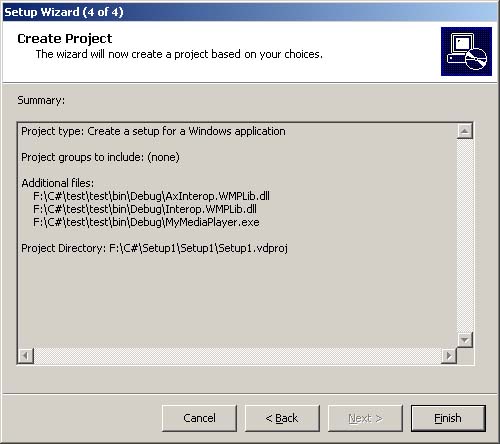 Now, it will display what you see in the following figure. 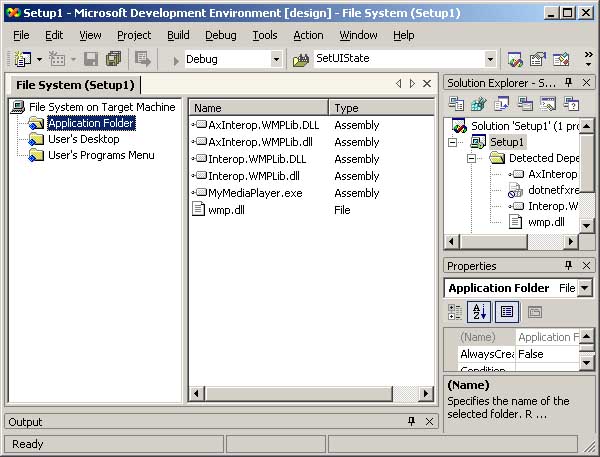 You can use the following editors during the deployment of your application.

You can find these editiors in the solution explorer, each as a button as shown below.

Allows you to add project outputs, files, and other items to a deployment project and specify where they will be installed on the target computer.

Allows you to specify Registry keys and values to be added to the Registry of the target computer.

Allows you to specify additional actions to be performed on the target computer at the end of an installation.

Allows you to specify conditions that must be met to successfully run an installation. 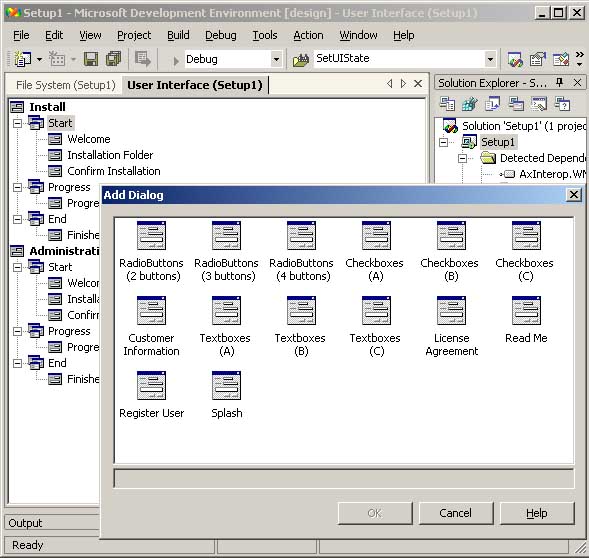 As shown in the figure above, the User InterfaceManagement Editor is used to specify and set properties for predefined dialog boxes that are displayed duging the installation on the target system.

You can add the dialog boxes, such as end user license agreement dialog and serial key dialog, as shown. 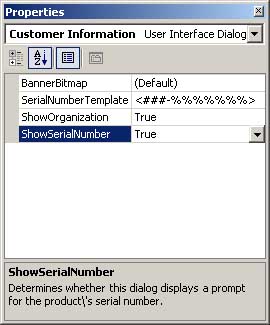 Note that any other character is treated as a literal constant. The Default template is <###-%%%%%%%>, which creates two text boxes separated by a dash surrounded by spaces. The first has #, which means that the user must enter three numbers but those numbers will not participate in the validation algorithm. The second box had seven digits; % means that it will be involved in the validation. You apply modulo 7 to the sum of these required digits; if it equates to 0, the algorithm returns true and the user can proceed to next dialog box. Example: <###-%%%%%%%>, 124 – 7134501 is one of the keys by which the user can proceed to next dialog box.

The first three digits—1, 2, and 4—can be any digits because they will not participate in validation. The next seven digits, 7134501, sum to 21; if you apply 21%7, you will get 0, so this is okay. Likewise, you have to proceed. You can add the dialog boxes, such as the end user license agreement dialog and serial key dialog as shown.

When you build the application, you will find the install program for your software or component in the projects debug directory.

I hope that many of the .NET developers who use traditional setup script programs will find this an easy and simple way to deploy your software. More than that, if you got the licensed Visual Studio .NET with you, there is no need to purchase setup applications from other companies because Visual Studio .NET itself offers it to you. I think that I had given enough features of Windows Installer that comes with Visual Studio .NET. Now it’s up to you.