ASP.NET Performance Improvements and VS2015 Profiler

Large scale application design indispensably considers some factors like scalability, maintainability of the code, and performance. Performance of an application is simply how fast a user’s request executes; this is especially important when the application is hit by thousands of users concurrently. The time taken for a high volume of concurrent requests with huge volume of database interaction would obviously be different in most cases compared to the time taken for the same request to run on a developer’s local machine. How well an application supports large numbers of concurrent requests while still having the system respond in a reasonable amount of time is called scalability. This article focuses on some performance improvement tips for ASP.NET Web applications you can utilize with Visual Studio 2015 Profiler while in the code development phase.

Poor server resources can be a reason for performance some times; however, there can be other reasons, such as server switching among different kinds of tasks accessing various static resources from the server, handling thousands of connections, disk I/O waiting for some tasks, running task intensive chunk of application, and eventually running out of memory. Generally, in large scale ASP.NET applications, parts of the code and logic will be separated into various tiers. Due to this separation of code and the boundaries between tiers, service calls will decrease performance by some percentage as well.

Performance and Diagnostic Tools VS2015

There have been profiling tools in Visual Studio for quite some time. Focusing on using those tools during development would be helpful to avoid performance issues. This article focuses on enhanced debugging features and diagnostics tools for profiling in VS2015 and how to use them when coding to analyze performance issues and a few general optimization techniques that developers can follow when coding the programs. Some features and tools are described below.

The most common practice during debugging sessions is that the developer keeps the cursor on a variable to know its value in Visual Studio. If a piece of code is observed running slower in general, the developer uses the System.Diagnostics.Stopwatch class to get the timing information, as shown in the following code snippet:

Now, with new PerfTips feature, which is part of Visual Studio 2015, there is no need to insert Stopwatch code and developers can measure the time that passes between the debugger breaks automatically. During debug, even if developer uses Step Into, Step Over, or Run to Cursor, the measured timespan is displayed in the PerfTip, as well as recorded as a list in the Diagnostic Tools window.

Let us say you have the following code:

Place the break point at the beginning of the for loop as shown below, and it shows the length of time elapsed by the time the debugger reaches it.

Lambda Expression Evaluation in the Watch and Immediate Window

For example, in the following code sample:

The developer can evaluate a LINQ expression like as the one below in the immediate window.

Diagnostic Tools are the tools that allow a developer to see historical information rather than values that can be observed at breakpoint. There are three main tools:

The Diagnostic Tools Window allows the application of profiling tools to the debugging work. Select Show Diagnostic Tools or click Ctrl+Alt+F2, as shown in Figure 2, to launch diagnostic tools in VS2015.

And that launches a Diagnostic tools window, as shown in Figure 3. 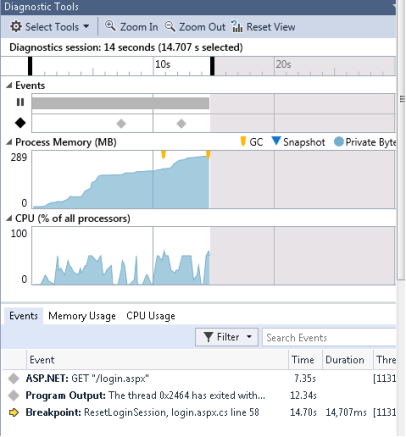 The diagnostic tools window shows the timeline in the upper half of the window, and detailed information in the bottom half of the window. VS2015 shows Events, Memory Usage tool, and the CPU Usage tool in the Diagnostics Tools window. In the earlier versions of Visual Studio, this data could be recorded only by using a profiling session. The Diagnostic Tools Window in VS2015 now will display the data always while the debugging session is active and thus any spikes in either CPU, memory, or garbage collections can be observed during debugging and the developer can easily track the code that is causing the spikes during the development phase itself.

CPU and Memory tools by van be enabled or disabled, as shown in Figure 4.

Figure 4: You can toggle CPU tools and Memory tools off or on

For example, if there is any unintended event left over on any UI control and that fires server side code to cause undesired results or any repetitive code causing delays, by using the historical call stack, the developer can check the code and find the bug easily. IntelliTrace allows users to record both live debugging as well as when application runs out side of Visual Studio environment.

If you select the second radio button, as shown in Figure 5, that is IntelliTrace events and calls information. IntelliTrace will intercept every method call and record it; this affects the app’s performance but it is a powerful debugging feature.

If you click an event in the list to expand it, you then can select Activate Historical Debugging and set the debugger to the point where IntelliTrace recorded the selected event, as shown in Figure 6.

You can double-click the event and it takes you to the specific code that relates to it for troubleshooting. You can filter the events from the filter dropdown, as shown in Figure 7.

VS2015 and 2013 both have the Diagnostics Tools Hub; you can launch that by selecting ‘debug ‘ -> ‘ Start Diagnostic Tools without Debugging’. This hub has many small tools that record and display CPU Utilization. You can run the application, record data, calculate results, and display the timeline visualization and details for recorded measurement in a Visual Studio diagnostic tools window.

In Visual Studio 2015, the hub contains the following set of tools:

As you’ve seen in this article, Visual Studio 2015 has many great debugging features that can help developers to write quality code by keeping performance in view.

Sudha Polapragada works as a Lead Developer with a Government Agency. She spent lots of her programming years working as an ASP.NET programmer and with Microsoft Technologies. She also specializes in Oracle and the Microsoft BI suite. In her free time, she explores features on various development platforms, including various database, front-end technologies, Big Data, and cloud technologies.