Looking at the Internet, I see a number of exceptionally functional sites personalized to my tastes. Much like staring at a map that says “You are here” and wondering, “Hmmm… how do they know where I am?!”, I am continually surprised at how advanced these sites are. A number of mature frameworks that free developers from mundane programming tasks have made this level of advancement possible.

Another thing that sticks out like a sore thumb is the level of reuse possible on most sites. For instance, every site has a header and banner. Some of them show a calendar, while others show forum-like applications. These reusable abstractions, or widgets, have been expressed in multiple ways in various application programming frameworks. In fact, entire products have been written on this concept of widgets; they just call them different names.

One such rather popular product was SharePoint Portal Server 2003, which called its reusable widgets WebParts. Thus, it makes perfect sense that ASP.NET 2.0 provides fantastic support for WebParts, and it definitely is no surprise to see Microsoft Office SharePoint Server 2007 (MOSS 2007) built upon this very framework. This article discusses WebPart framework basics, which can serve as the foundation for more advanced topics such as WebPart support in MOSS 2007.

The Major Components of the ASP.NET 2.0 WebPart Framework

Before diving into a sample WebPart-driven Web site, you must first understand the major reusable controls built into the .NET framework, which you will use to set up the site:

Now that you familiar with the basic building blocks of the ASP.NET 2.0 WebPart framework, dive straight in and write your first WebPart.

You can masquerade any control using GenericWebPart, but that wouldn’t be a true WebPart because a true WebPart inherits from the Abstract base class System.Web.UI.WebParts.WebPart. So, the code for a simplistic WebPart that simply shows a line of text is as follows:

Don’t worry about the WebBrowsable and Personalizable attributes just yet—more on those shortly. For now, view this as a simple server control that renders the displayText, which is exposed as a public property: DisplayText. The obvious next question is: How can I make use of this WebPart?

Create a simple ASP.NET 2.0 Web site, and add a reference to the class library that holds the WebPart you just wrote. In the default.aspx, perform the following steps: 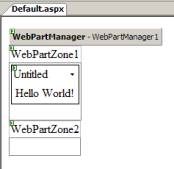 The code so far is really simple:

Also, note that the first time you ran the Web site, the SQL Express database ASPNETDB.MDF showed up as follows:

This is because the WebPart framework, much like a lot of other important functional blocks in ASP.NET 2.0, use that SQL Express database by default. If you were to customize your WebPart, move it between different WebPartZones, or perform any personalization that was tied to URL rewriting or the Membership API, and so forth, all of that information goes into that SQL Express database by default. Of course, all of that is very easily changeable thanks to the provider model and a few easy web.config changes.

You can do a number of really awesome things with the WebPart framework—way more than one article can cover. So far, you have seen very basic functions. What if the user wished to change the display text, or simply move the WebPart from WebPartZone1 to WebPartZone2?