What is Thread Synchronization?

Thread Synchronization is a mechanism used to disallow multiple threads from accessing a shared resource at the same point in time.  In other words, thread synchronization can help prevent multiple threads from gaining access to a shared resource simultaneously. As a result, you can have one and only one thread enters a critical section simultaneously.

Read: Working with Files in C#

Why do we need Thread Synchronization?

When a process or a thread wants to access an object, it requests a lock on that object. There are two types of locks that determine access to shared resources – exclusive lock and non-exclusive lock.

An exclusive lock makes sure that only one thread can gain access or enter a critical section at any given point in time. You can implement exclusive locks using the lock keyword (syntactic sugar for the static methods of the Monitor class) and the Mutex and SpinLock classes in C#.

What is a Thread Deadlock in C#? Why Does it Occur?

Deadlock is a blocking situation in which a set of concurrent processes share the same resource and are stalled by each other because they are attempting to access a resource already locked by another process. In other words, deadlock is a scenario in which a group of concurrent processes is stalled because one process is holding a resource while waiting for another resource that has already been obtained by another process.

Deadlock can occur if the following conditions hold true:

Let us understand deadlock with an example. Consider two processes P1 and P2 are waiting for one another to relinquish control on the resources R1 and R2 held by each other. Now imagine the following sequence of events:

Hence, both the processes are blocked and can’t move ahead locks on the shared resource are relinquished. We can now say that the two processes P1 and P2 are deadlocked!

Note that deadlocks can occur much the same way when you’re working with concurrent threads are accessing a shared resource.

How Can You Prevent Deadlocks?

The simplest way to avoid deadlock in C# is by using the Monitor class with a timeout value. The following code snippet illustrates how this can be achieved.

What is a Mutex?

Mutex is a synchronization primitive used in thread synchronization to grant exclusive access to one and only one thread at any given point in time. Once a thread has acquired a mutex, another thread that attempts to obtain the mutex will have to wait till the previous thread relinquishes control of the mutex. It should be noted that after a thread has finished leveraging a mutex object, it must call the ReleaseMutex method to relinquish control.

The following code snippet illustrates how you can create a mutex and release it when you’re done using it.

Waiting on a mutex implies waiting until you can get it. The WaitOne method returns true if the mutex can be obtained within the specified duration, false otherwise.

What is a Semaphore?

The following code listing illustrates how you can work with semaphores in C#.

When you run the above program, here’s how the output will look like: 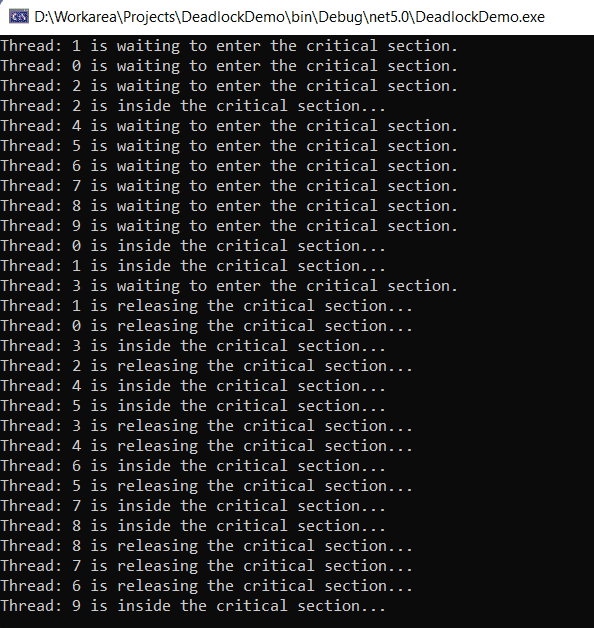 Summary of Thread Synchronization in C#