In Figure 1, you can see the software architecture. As you can see, the .NET Micro Framework includes a runtime, libraries, and more. Also included in the architecture is an abstraction layer for the hardware (HAL). Whereas embedded applications are generally written to specifically target hardware, that is not the case with the .NET Micro Framework. As an embedded developer, you would use the standard routines in the library. The hardware vendor you use would then provides the underlying abstraction layers of the HAL along with an abstraction layer for the platform (PAL). 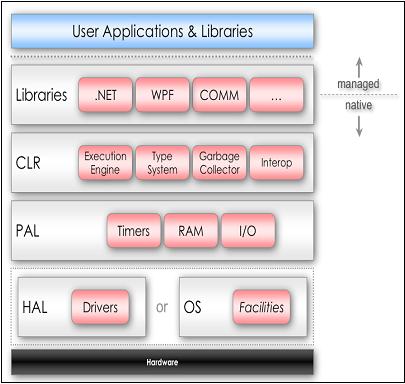 When you get a piece of embedded hardware, the hardware manufacturer should supply you with a copy of the .NET Micro Framework. The version they give you will have their HAL and PAL included. The result is that you can write standard, Managed C# code using standard libraries. If you change hardware, you should only need to swap to the new hardware’s copy of the .NET Micro Framework, which will replace the HAL and PAL. Your program should require no changes as long as the hardware is similar.

The .NET Framework’s object model is smaller than the .NET Compact Framework and obviously smaller than the full .NET Framework. The framework can fit in as little as 256 Kb of RAM along with as little as 512 Kb of flash memory. In that tiny bit of space, you get a number of the classes that .NET Developers already know. This include threading, text, reflection, streaming, debugging, ArrayList, math, and much more. Figure 2 shows an abridged version of the object model. 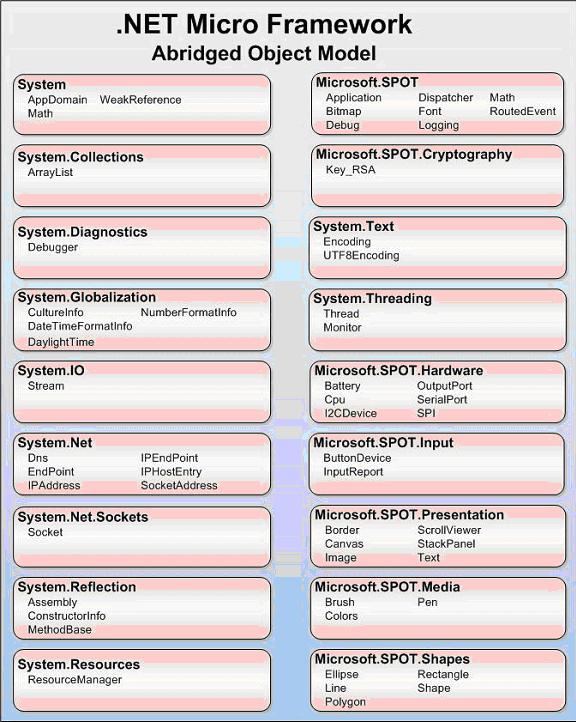 It is worth pointing out that the .NET Micro Framework is not a direct subset of the the .NET Frameworks. In some cases, classes have been moved to other libraries. This was done for the sake of easing navigation and providing a tight focus to keep things small.

Read more
Previous articleCodeguru Update eNewsletter – September 18th, 2007
Next article.NET Tip: Throwing Exceptions: Will You be Able to Catch What You Expect?