An addition to the Microsoft .NET framework 2.0 to 1.x is the support for FTP. Earlier, you had to rely on third party libraries that pretty well suited most of your needs, but for sure, there is an extra pleasure using the .NET framework library classes. The code included is not designed to be a full-fledged reusable library, but rather an easy to use and reusable piece of code that is easily comprehensible and can be reused and tweaked to fit your specific needs. Therefore, the code for each functionality (upload, download, delete, and so forth) can be easily picked up separately and reused. The main motive behind this article was the unavailability of .NET 2.0 FTP sample codes and their usage in C#, maybe because it’s a new entrant to the .NET scenario, or the third party implementations available were working pretty well, that this area of the .NET 2.0 library hasn’t gotten enough focus.

I started working on this FTP module as part of my official work, but the requirement soon changed, and I had to do it for .NET 1.1. So, I haven’t travelled deeper into the rabbit hole. But I believe this gives a good, instant start for using the FTP support in .NET 2.0. 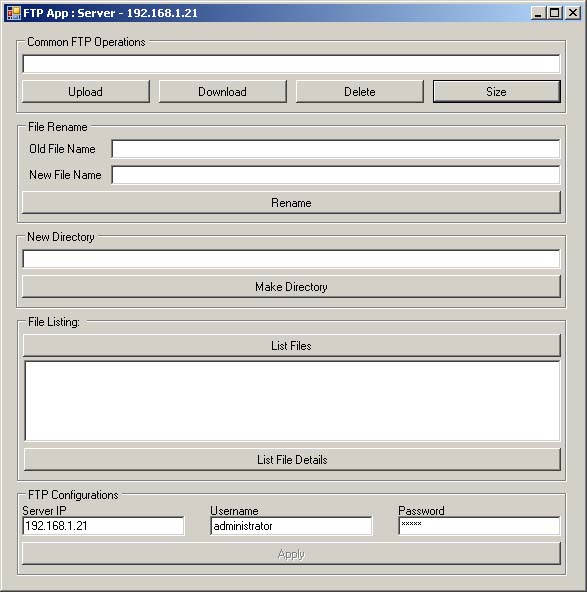 The following steps can be considered as a generic procedure of getting an FTP request executed using the FtpWebRequest object:

One point to watch out when coding for any FTP application is to have the settings for the FTP request proper to suit the FTP server and its specific configurations. The FtpWebRequest object exposes many properties to have these settings in place.

Setting Up the Upload Functionality

First, a URI is created; it represents the FTP address along with the filename (directory structure included). This URI is used to create the FtpWebRequest instance.

Then, properties of the FtpWebRequest object are set; these determine the settings for the FTP request. Some of its important properties are:


Above is a sample code for FTP Upload (PUT). The underlying sub command used is STOR. Here, an FtpWebRequest object is made for the specified file on the FTP server. Different properties are set for the request, namely Credentials, KeepAlive, Method, UseBinary, and ContentLength.

The file in your local machine is opened and the contents are written to the FTP request stream. Here, a 2Kb buffer is used as an appropriate size suited for upload of larger or smaller files.

Above is a sample code to download a file from the FTP server. Unlike the Upload functionality described above, Download would require the response stream, which will contain the content of the file requested.

Read more
Previous articleIntegrate Ink into Your Application with Windows Vista
Next articleCreating a Data-Bound Grid in C# with ADO.NET