When it comes to advances in technology, new features and/or functionalities typically fall into either the revolutionary or evolutionary category. Although an evolutionary change can seem minor at first, a more careful analysis can show that evolutionary changes sometimes make a significant difference in an application’s performance or the way it is developed.

The next version of the .NET Compact Framework, version 2.0, includes a significant number of changes and enhancements. In the area of data access and manipulation, a first glance might lead the average Windows Mobile developer to classify the new functionality as evolutionary and unworthy of a judicious evaluation. This could be a major mistake, however, because several aspects of data access in the new .NET Compact Framework can reap serious rewards.

Mike Zintel, who manages the .NET Compact Framework development team, recently posted benchmarks for the .NET Compact Framework 2.0 compared to earlier versions. The complete benchmark information can be found at his blog. Most interesting are numbers associated with XML data reading. The XML Text Reader has improved performance by nearly 50 percent over the .NET CF v1.0 Service Pack 3, and well over 50 percent since the original version. A 200KB XML file can now be processed in well under one second. In addition, the reading of XML data by an ADO.NET DataSet using the ReadXml method has improved nearly three-fold since the original Compact Framework release. As a developer who often relies on XML data in a number of applications, the performance improvements in the .NET CF v2 have a major positive impact on my development strategies.

In addition to the System.Xml namespace in the .NET CF v2 is a very welcome addition for many Windows Mobile developers. The Serialization namespace brings the .NET Compact Framework far more in line with its “big brother” by providing serialization and de-serialization capabilities, which are often needed in .NET applications (see Figure 1). 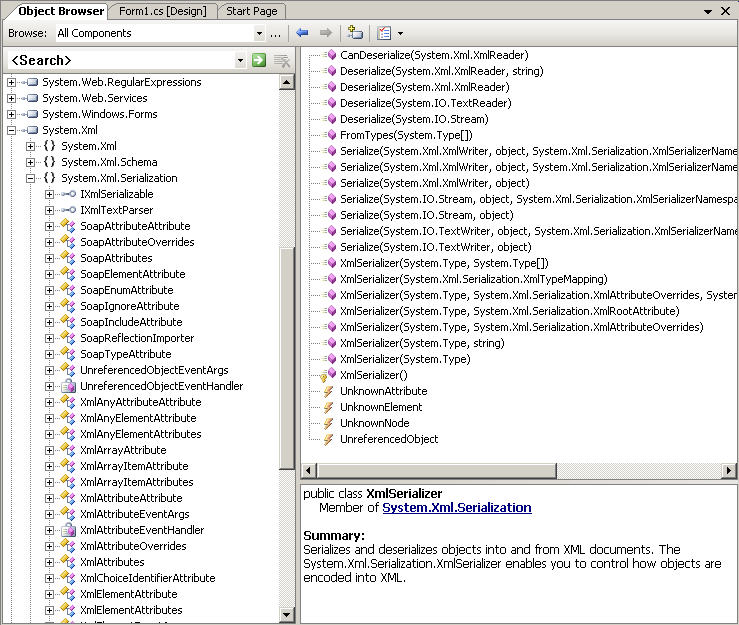 SqlCeResultSet: The Best of DataSet and DataReader

An ideal solution for developers would be to provide the updateability and scrolling nature of the DataSet with the performance of the DataReader. The .NET Compact Framework 2.0 has delivered just this kind of solution in the new SqlCeResultSet. The SqlCeResultSet exposes an updateable and scrollable cursor, allowing for the manipulation of data, while eliminating the double-buffering associated with the DataSet. The result is improved performance and reduced memory requirements.

To use a SqlCeResultSet, you actually need to call the new ExecuteResultSet method of the SqlCeCommand object and set ResultSet options as follows:

An important similarity between the SqlCeResultSet and an ADO.NET DataSet is that both can be used for data binding to controls. One difference between the two objects relates to the SqlCeConnection object. A SqlCeResultSet requires an open connection while working with the ResultSet. As a result, take care with regards to multiple threads accessing the same connection.

Although the Windows Mobile platform is not a server-based platform, developers can translate these functionalities from multi-user to multi-process, allowing multiple threads from a single application or even multiple applications on the device to access a SQL Mobile database in an efficient manner.

SQL Mobile has received a number of performance enhancements, including the following:

Finally, SQL Mobile provides benefits to those responsible for administering databases. The new SQL Server 2005 management tools have the ability to administer SQL Mobile databases in new and enhanced ways, including the following:

Worth a Closer Look

The argument can be made that the data-access and -management enhancements made to the .NET Compact Framework and SQL Mobile are evolutionary. These enhancements, however, can have a significant impact on your Windows Mobile applications in terms of performance and productivity. You should take the time to explore all that’s new in the .NET CF v2 now and factor these features into your Windows Mobile project plans.

Read more
Previous articleTIP: A Quick Way to Write Public Properties in C#
Next articleHow to Display UNICODE Characters in a CListCtrl or a CEdit