Physics and new microprocessor architectures are forcing .NET developers to tackle Parallel Programming and rethink how they build responsive applications. My previous article, New C# and VB.NET Async language features, built on the Task Parallel Library (TPL) will eventually supplant the exiting Asynchronous Programming model and TPL will permeate all areas in the .NET Framework.

Narrowing a TPL Pattern introduction is not easy. Applications can leverage TPL in a variety of ways and application architecture can assume many forms. Still there is a core set of patterns that a developer will consider no matter the architecture. Below is a summary of the core patterns. Each will be examined in this article.

When tapping Concurrency for the first time, Shared State is the first pattern most developers will deal with so it’s the first Pattern covered.

Synchronization is managing access using things like mutexes or monitors. The sample code below demonstrates one of these techniques.

Immutability is somewhat new to.NET developers. Most developers are accustomed to passing references around an application. Truly immutable data never changes once it is initialized and references are avoided. Instead, operating on data structures requires making or cloning a copy. Immutable classes work a lot like the String class. String classes are mostly immutable. String methods return a copy of a completely different string rather than a mutated version of the existing string.

Synchronization and immutability can be thought of as the two extremes. Isolation exists between the two. There are a number of ways a developer can implement isolation. One common way is to take an Agent based approach to Concurrency and pass messages (chunks of data) between Agents executing their work on a ThreadPool. Task Parallel Library Dataflow is a library suited to implementing the message/Agent based approach to isolation.

As you may have guessed there are tradeoffs between each approach. Synchronization can create contention and bottlenecks in concurrent code. Immutable data structures may not be practical. Isolation can be hard to achieve.

For developers who are new to the Task Parallel Library, parallel loops are a good place to start introducing concurrency. As you can see, the coding conventions are already familiar. The most important part of understanding Parallel loops is understanding that each iteration must be independent.

Each iteration is dispatched onto the ThreadPool much like the graphic below depicts. 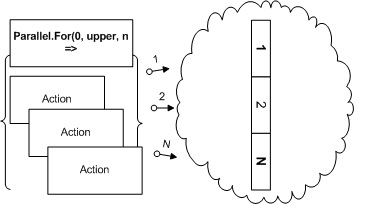 When running the sample code above, one surprising outcome is the output doesn’t execute in an ordered fashion. Later parts execute before earlier parts. Yet, the loop doesn’t terminate until all iterations have executed.

By far, the most common TPL Pattern is the Producer/Consumer.

Producer/Consumer assumes many faces; though every implementation will follow these guidelines.

The sample below demonstrates the Producer/Consumer pattern using a BlockingCollection class.

Shared State, Parallel Loops, and Producer/Consumer Patterns are just a few Parallel Patterns that leverage the Task Parallel Library. This article gives a developer a taste of the Patterns that must be mastered. For further study, delve into the resources at the end of this article.

“Patterns of Parallel Programming: Undersanding and appliying Parallel Patterns with the .NET Framework 4.0 and Visual C#”

Introduction to Pattern Matching in C#