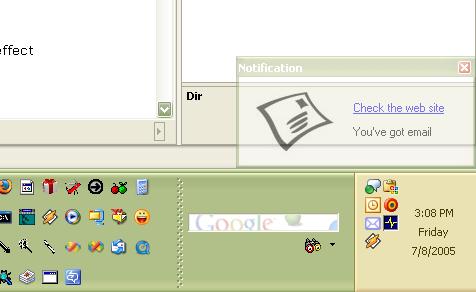 If you are just interested in adding the fade in/out effect, you can derive any TransDialog form as follows.

Passing true to the base class will ensure that when you call close on the Notification form, TransDialog will call Dispose and do the cleanup.

TransDialog uses the layering (opacity) property of the form to add the fade in/out effect. At the Form Load event, the opacity of the form is set to 0 (completely transparent or invisible) and a m_clock timer is started. The m_bShowing variable is set to true. The timer is set to tick every 100 ms.

On every Tick event, as long as m_bShowing is true, the opacity is increased until is reaches 1 (completely opaque):

This gives the fade-in effect.

The fade-in/out effect on the notification works just by deriving from TransDialog. To show the form at the correct location over the system tray, the following code is used in the load event handler: