Since the advent of computing, production mode application failures have caused many developers to grimace in pain because of the lack of ability to debug on a production server which could amount to huge monetary impact on business operations). Since these developers don’t have access to the live process, they ask for the next best thing – a memory dump.

So, what are these dumps you talk about? A dump is defined as a representation of a working application at a particular state in time. What that means is that a dump is a snapshot of the application. Dumps are of three major types:

In Microsoft Visual Studio 2008, because of the lack of API support in .NET framework 3.5, there was only native dump debugging. If you wanted to do managed dump debugging, you would load the dump in windbg and load the sos.dll extension or the sosex.dll extension (SOSEX v2 Now available here).

The CLR folks over at the .NET framework team added support to debug dumps in the ICorDebug api. Details of the API changes are mentioned at the blog post titled, ICorDebug re-architecture in CLR 4.0. These changes mean that we no longer have to do native style debugging (windbg/sos) of a .NET framework 4.0 dump; rather, we can use VS 2010 or mdbg (the sample managed debugger which ships with .NET Framework 4.0 SDK) to do managed dump debugging.

How Do I Get Dumps of Managed Applications?

There are multiple ways you get dumps of managed applications. 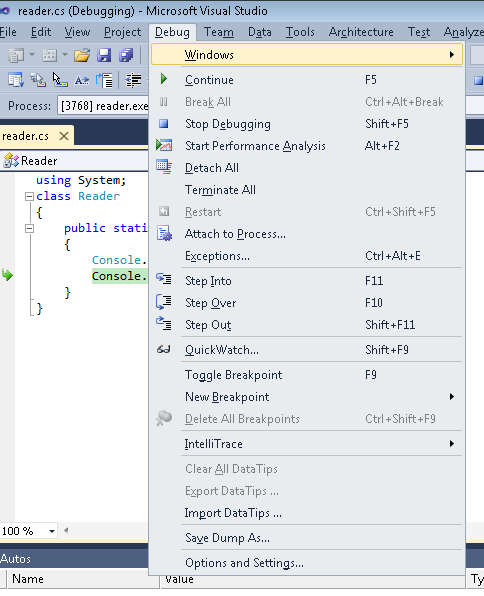 Now that we have our dumps, let us go through an exercise of debugging dumps using managed debuggers like mdbg and Microsoft Visual Studio 2010. Let us write a small application and then create a dump for debugging purposes.

Compile the above file reader.cs in the debug mode to generate symbols to facilitate debugging.