In this weekly article we’re going to focus on another topic that is often
under utilized, which is conditional compile statements and how to use them in
your code.B The most common place I use these is when I have multiple versions
of my application.B For example, let’s say I have a full feature version as
well as a trial version of my application.B I define multiple solution
configuration profiles and compile my code under the desired profile.B
Conditional compile statements used in code surround code that is activated or
not based on the active configuration.B They are extremely useful regardless if
you are a C#
developer doing C#
programming whether it be for ASP.NET
developer, WCF,
or general .NET
Framework developer. 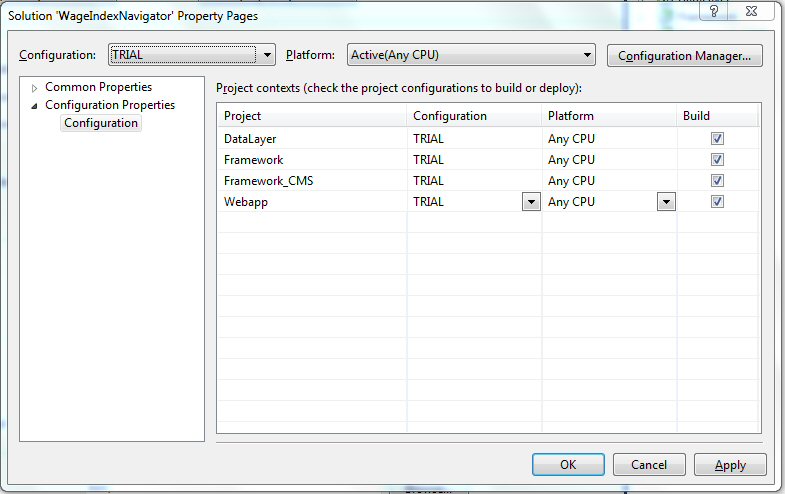 The properties of each project also have a Build tab where you can control
whether the DEBUG or TRACE constants are defined, whether code is optimized,
warning levels, etc.B

The following section will demonstrate some sample code that is wrapped in
conditional compile statements.B The statements govern whether or not the code
is considered part of the project during compile based upon the active
configuration.B In this particular example, I have a multiple tenant ASP.NET
application.B In production the application determines which tenant is running
based on the URL.B When in development, I use different solution configurations
to govern which tenant is considered active.B The following code is an indexer
on an application settings object that pulls cached settings from memory based
on the tenant being used.B It isn’t as important that you understand this
particular code, but rather see how conditional compile statements can work to
your advantage.

Mark Strawmyer is a Senior Architect of .NET
applications for large and mid-size organizations. Mark is a technology leader
with Crowe Horwath LLP in
Indianapolis, Indiana.B He specializes in architecture, design and development
of Microsoft-based solutions.B Mark was honored to be named a Microsoft MVP for
application development with C# again.B You can reach Mark through http://markstrawmyer.com.