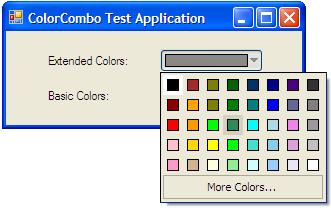 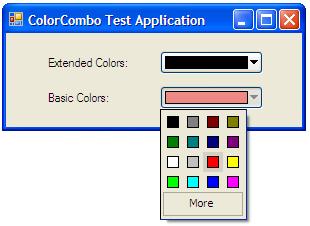 This is a demonstration on the use of the ToolStripDropDown class by creating a color picker combobox. Honestly, I’m surprised that the .NET framework doesn’t come with this control, because any rich text editor application would need one of these in their toolbar.

Because this is my first attempt at C# programming, my first thought for accomplishing the task of creating the ColorComboBox was to create a control that would inherit from a CheckBox, which, when checked, would create and display a form without a title bar, where the form would house the flat radio buttons representing the colors. While the popup window is being displayed, any mouse clicks outside of it have to be detected to close the popup. I soon learned that the only way to pick up the mouse click outside of the popup window is to use a Windows Hook (you all know that capturing the mouse would not allow the user to click on the child buttons). But, that would tie this control to Windows. So, I had to find a .NET way of doing the same thing; this led me to the ToolStripDropDown class.

The other problem with this thought process was that I was exposing the checkbox’s properties to the outside world. The checkbox needed to be flat, with no autosize, and the Text property had to be empty. The first two, if not set correctly, would have catastrophic results. So, I wrapped the entire thing with a UserControl-derived class to hide the CheckBox‘s properties from the user.

Let me get into some detail.

The ColorComboBox class, which inherits form UserControl, is pretty simple itself. It has a constructor and two event handlers, one for the SizeChanged event and another to catch the ColorChanged event form the color popup, to relay to the parent control.