Visual Studio 2010 beta 1 ships with a new feature called Code Contracts. This is the result of a Microsoft Research project. They allow you to specify coding assumptions in .NET programs. These assumptions can be pre-condition, post-condition and object invariants. However, this new feature can also be used in Visual Studio 2008, except that one needs a separate download, from DevLabs.

The same download is actually necessary for Visual Studio 2010, because beta 1 does not ship with the tools that perform the static or runtime checks on the contracts. It’s likely that the final release will include these tools, but one can start writing code contracts even without the tools, and have the code compiling. The contracts code is available in namespace System.Diagnostics.Contracts.

When you download and install the tools, an additional property page is added to your .NET properties. It’s called Code Contracts and allows you to specify runtime and static checks. This page is shown below. 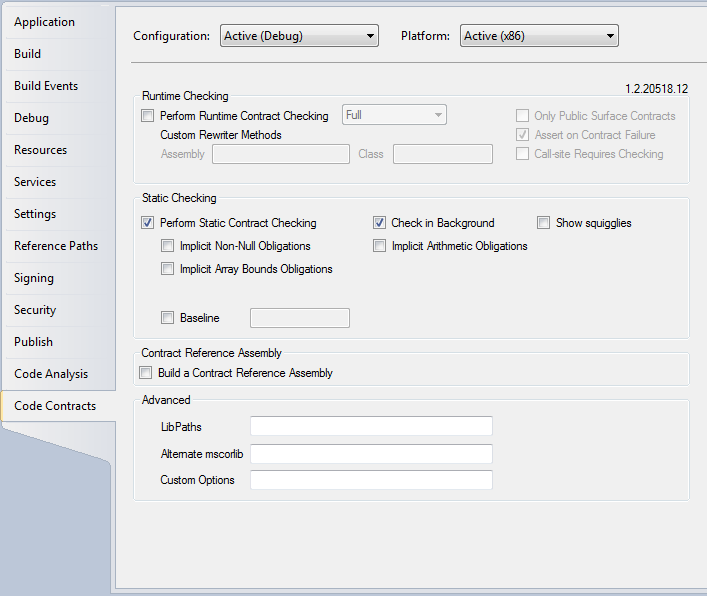 Preconditions are used to specify condition that must hold for a function to execute. They usually indicate constraints on the parameters to the function or maybe member variables. There are two restrictions on preconditions:

Preconditions must always be specified at the beginning of a function and are introduced with the following methods:

The following sample shows how to use Requires() to impose conditions on function arguments.

I have mentioned earlier that function EndContractBlock() is used to indicate the end of the contract statements. When using Requires() or RequiresAlways() it is redundant. But the static checker can interpret legacy code, like the one shown below, as pre-conditions. In this case, a call to this function indicates the end of the pre-conditions block.

This can be transformed into a pre-condition:

Let's see what happens when we use this type:

First call to Deposit(100) is ok, but the second with issue a warning by the static checker, because the argument is negative. The calls to Withdraw() are both valid from the point of view of the static checker, but if runtime checking is enabled, an assert will occur as shown in the following image. 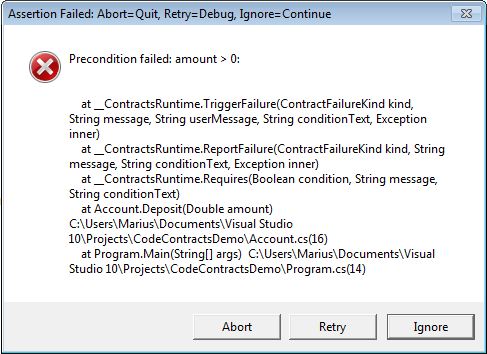 Postconditions are statements that must be true at the end of the execution of a function. They are defined at the beginning of a function, just like preconditions. They are introduced with:

There are several special methods that can be used in postconditions:

For instance, the following post-condition ensures that method Deposit() actually increases the value of the balance.

They specify conditions that must be true for all public methods of a class, at any time. They are specified in a parameterless function that returns void, is marked with attribute ContractInvariantMethod, and doesn't contain anything else than a sequence of calls to Contract.Invariant().

In the Account example, the Balance should always remain greater or equal than zero. One way to ensure that is to use post-conditions on the two methods of the class, Withdraw() and Deposit().

However, the static checker cannot ensure that at the end of Deposit() execution the balance is greater or equal than zero, since it doesn't know the previous value.

This goal of ensuring balance is never negative can be achieved with objects invariants.

These are different than the other conditions in the sense they are not required to be specified at the beginning of a function's block, but are not part of the method's signature, as the other contracts are considered.

These are conditionally defined and exists only if the DEBUG or CONTRACTS_FULL symbol is defined.

These are conditions that can be applied on a sequence. Only forms that are verifiable at runtime are supported. The following quantifiers are available:

The following examples checks (at runtime, because at static checking it's only an assumption) that all grades are positive.

The following example requires that at least a communication channel exists and is opened.