In a prior article, http://www.codeguru.com/csharp/csharp/cs_network/internetweb/article.php/c13513/, I introduced you to Windows Communications Foundation. In the article, I gave an overview of what WCF is and how WCF fundamentally works. I shared how WCF classes are divided into the Service Model layer and the Channel Layer and I mentioned that Channels and Bindings are a good place to begin your study of WCF. In this article, you’ll learn how to build Channels and Bindings. First, you’ll look at the anatomy of a channel and then look at how you code a Channel using the WCF classes.

What Is a Channel?

Messages emitted from the topmost Channel in the stack are carried by what WCF calls the Dispatcher to functions you’ve created and mapped to the Contract in your service. The whole arrangement of Channel Stack and Dispatcher looks a lot like the figure below.

As you may have guessed, there is a little more to Channels and building a Channel Stack than this description would have you believe. There are many more working pieces living inside a Channel Stack making the Channel Stack do its magic.

This article focuses on the Service side of WCF, so you’re going to focus on the role of the ChannelListener and Channel in the Channel Stack.

Bindings are the “B” component of an Endpoint. Again, refer to the introductory article for more information. Bindings are a collection of Binding elements. Binding Elements build ChannelListeners and, as stated earlier, ChannelListeners build and manage Channels. The figure below graphically depicts the relationships between the classes. 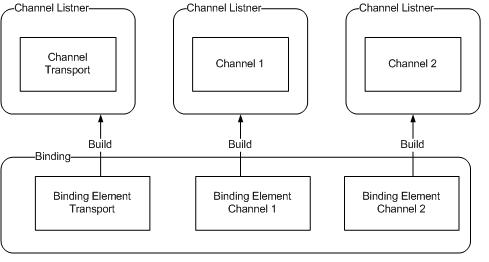 According to the Microsoft documentation, Channels are decoupled from one another and instead are mediated by the Channel Listener.

The sample implements a Datagram pattern because it’s the most basic of the patterns and the simplest to implement. There are many ways to mix the role of ChannelListeners and Channels. My sample design is based on my interpretation of the documentation along with a review of the samples shipping in the SDK.

In the sample, there are three Channels in the stack. A transport channel creates the message and two other protocol channels attach header data to the message.

The State Machine governing WCF communication can invoke Channel functions asynchronously or synchronously. Every Message Exchange Patten contains each invocation style. For simplicity, only the Synchronous style has been implemented.

Also, the sample interacts directly with the Channel Stack. So, nowhere in the sample code do you declare a Contract. To run the samples, you’ll need the latest SDK.

You’re finally ready to look at some code. You’ll start with the Channels and Channel Listeners, understand the binding code, and then invoke the Channel Stack without building other parts of a Service.

There are two key functions in the IInputChannel, the WaitForMessage and the Receive function. When a message is present, WaitForMessage returns true. Receive then retrieves the message. Below is the Receive message on one of the Protocal Channels.

Now, take a look at the ChannelListener.