This article is based on features in the Visual Studio Ultimate Edition Beta 2. I’m not only using a Beta version, I’m using a high-end license version. Though a second Beta will likely have feature parity with a product release, not all licenses will have all the features I demonstrate in this article. 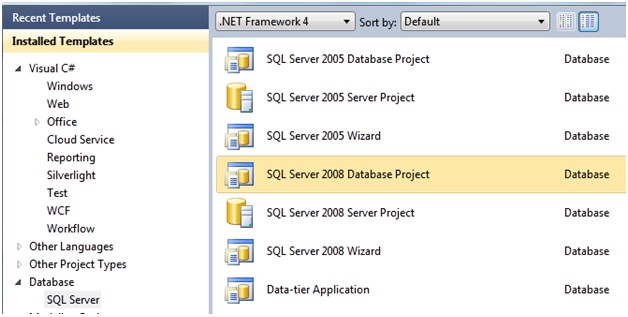 A database project and server project include many of the same template items. Server projects include some additional server specific items like Service Broker Endpoints, Server Accounts, and linked servers. Database projects include some additional storage item templates like filestreams. As you explore each project template you’ll also note differences in the template folder structure and deployment options.

To demonstrate key features across the templates I created 3 projects.

Unless I note otherwise, all demonstrations in this article will use the AdventureWorks database project.

Intellisense is probably the first feature a developer will notice. As I mentioned earlier, prior versions of the database development environment lacked a good TSQL editor. Below is a short intellisense demonstration.

There are some tricks you’ll want to follow to work with the intellisense. As you may have observed, I filled in the FROM clause before adding fields. FROM is entered first because there is no way intellisense can guess what you will place in the SELECT portion, unless each field is fully qualified with a Schema and table name. If you do find intellisense annoying you can disable it.

Instead of typing all your code, from the Schema view you can drag and drop fields into your TSQL statements. Unfortunately there is no way to simply drag and drop the field without fully qualifying it.

Code snippets are another nice editor feature. Below is what this behavior looks like.

If you develop in other Visual Studio languages, you’ll appreciate living in a single tool for all of your development. The improved editor completes all parts of application development, from the database, through the data tier, and into the core of the application.

A new editor is great, but database development is difficult without some test data.

Data Generation plans are useful for Testing and Debugging, the next stop in the tour.

To do proper testing with other parts of an application a developer must deploy the database. The Deployment section on the project properties includes some basic configuration information. A snippet from the deployment section appears below.

Later in the article I’ll show where you can extend and customize deployment scenarios. Debugging can be done with a test database or from a local “Database File”. Target Connection options appear below. 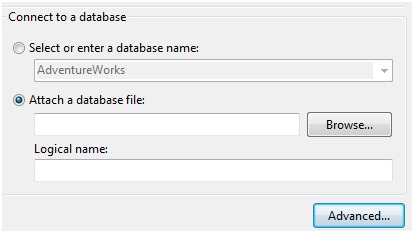 Thus far, all the features I’ve discussed have been productivity boosts. There are other features extending a developers ability to configure and control database execution context.

A database design often goes beyond table, view, function, and stored procedure definitions. Assumptions about case sensitivity and how NULL is handled play a large role in the behavior of the code. I think of the collective configurations as the code execution context. A lot of this information is stored in a set of Properties files. Below are the AdventureWorks project Properties.

Earlier I mentioned configuring and customizing deployment scenarios. Many more deployment options can be found under the Database.sqldeployment property. Database.sqlsettings stores things like: NULL handling, Warning levels, Recover mode, and other general database behavior under.

The final feature to discuss is Code Analysis.

Code Analysis tools have been part of Visual Studio for some time, but have really begun to shine in Visual Studio 2008. I’ve always been intrigued by analysis results and code analysis potential. Though Analysis is not a silver bullet for maintaining supportable code, it can bolster what a developer may know intuitively, but may not have “hard facts” to support. Code analysis can also be embedded in “check-in” and “check-out” policies.

Analysis has been extended to TSQL code. Analysis options can be configured on the Project properties. Analysis properties appear below.

Executing Code analysis generates a report. A developer can configure how forcefully to apply code analysis or remove an analysis rule altogether.