Multiple inheritance basically means a class derived from more than one base classes. This is an efficient class design to reuse the properties of multiple classes into a single composite class. The syntax in implementing one in the hierarchy of inheritance is quite simple. But, there are ambiguities and strange situations that may occur down the hierarchy. This is the simplest reason why pure object-oriented languages such as Java or Smalltalk disallow class design with multiple inheritance completely. C++, however, retained the idea with many traits of the object-oriented model for the sake of the advantage it provides, although with a caution of careful design. This article covers some traits associated with multiple inheritance in C++ with appropriate examples.

C++ is termed as a hybrid language due to its support for multiple languages paradigm, be it the object-oriented principle of Smalltalk or procedural legacy of C. Unlike its predecessor Smalltalk, a pure object-oriented programming language, C++ inherits many of its object-oriented characteristics. It also includes functional features, low-level memory manipulation technique, and is a superset of C. Pure object-oriented programming languages like Smalltalk or Java support class hierarchy as a single monolithic tree, so the question of multiple inheritance does not arise with them. However, C++ allows multiple distinct inheritance trees. Therefore, the idea of multiple inheritance as a logical fortification of combining of more than one base class can be derived into a single class. Now, the question is do programmers really need multiple inheritance? This is a debatable proposition because there are a lot of arguments both in favor of and against this feature. But, the important fact is, unlike Java, there are no restrictions imposed by the language and C++ is open to both the arguments. The choice, however, lies with the programmer who can happily design their classes according to their like.

Use of Multiple Inheritance

It is easy to create a flexible class design using multiple inheritance. For example, we can combine the benefits of a class created by two separate entities and derive a new class. Notably, the template basic_iostream class is a derivation of two templates, namely basic_istream and basic_ostream, in the standard C++ library. The operators overloaded in the base classes provide a convenient notation for performing both input and output. For example, the left-shift operator (<<) overloaded in the basic_ostream is designated for stream output and the right-shift (>>) operator, overloaded in basic_istream, is designated for stream input. These operators are used with the standard stream objects cin, cout, cerr, and clog. Therefore, basic_iostream combines the benefit of both the input and output operation into a single entity.

Multiple inheritance is a powerful capability to encourage interesting forms of software reuse but it cannot be denied that it also poses a variety of ambiguity problems. The problems are often so subtle that modern programming languages like Java or C# completely removed the idea from their programming paradigm.

A very common problem associated with multiple inheritance is that the base classes may have data members or member functions with a common name. This is a situation of clear ambiguity during compilation. Consider the following example.

This ambiguity is due to the fact that the derived class object contains two getInfo() functions: one inherited from class A and another from class B. However, we can resolve the problem by using the scope resolution operator as follows. 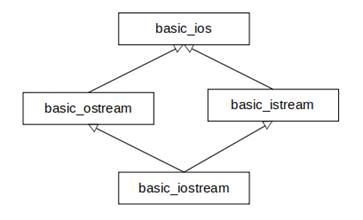 The example structure is a classic example of this potentially problematic model yet carefully designed structure found in the standard C++ library. The classes basic_istream and basic_ostream inherit from basic_ios. basic_iostream can contain two copies of the members of class basic_ios, one inherited via basic_istream and another via basic_ostream. Had it not been carefully designed, it would result in a compilation error.

Using the Virtual Base Class to Overcome Ambiguity

We can, however, eliminate the problem by using virtual base class inheritance. In this way, the class is inherited as virtual, which means only one copy of the sub object will be inherited by the derived class. Other parts of the code will remain the same; the ambiguity is simply removed.

How to Operate on Strings in C++