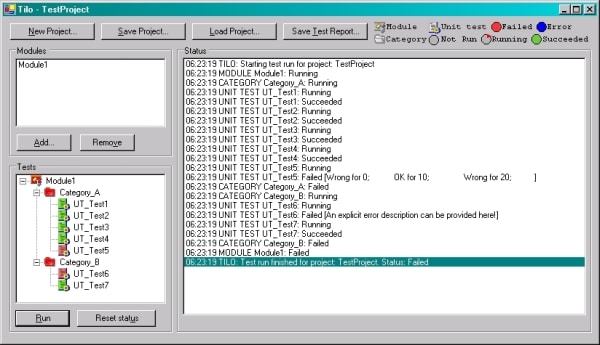 TILO is a program/tool designed to help developers create and run unit tests. Unit tests will have to be coded, not written, and will be executed automatically by the tool.

For more information about TILO, visit the TILO Homepage.

What the programmer has to do

that will perform the unit testing and return true or false, depending on the outcome. Also, the programmer must export a function called GetUnitTestProcs with the following prototype:

What the tool does

The tool is written mostly in C#, and a module is written in C++. The C++ module provides an interface between the native Windows DLL and the managed C# code.

The application is comprised of four modules:

A project means one or more DLLs that have to be tested. Projects are saved to disk in XML format.

The InvokeHelper DLL exports only two functions, with the following signatures:

The ExecuteUnitTest function loads the DLL with the given name, finds an exported function called strTestName, calls that function with strMsg as parameter, and returns the value returned by that function, which should be 1 (one) if the test succeeded and 0 (zero) if the test failed. If the function cannot be found or other errors occur, ExecuteUnitTest should return an appropriate error code (error codes start at 100).

A TestObject class is the base class for all the other classes in the module and it provides some common functionality. It exposes the following members:

A UnitTest object represents just that, a UnitTest. This class derives from TestObject. The UnitTest class exposes the following members:

A Category object represents a category of test cases. It encapsulates a series of related test cases. It can contain other categories, such that a tree structure can be formed, where categories are nodes and UnitTests are leaves. This class derives from TestObject. The Category class exposes the following members:

A Module object represents one DLL that needs to be tested. It contains one or more categories of unit tests. This class derives from TestObject. The Module class exposes the following members:

A Project object represents one unit testing project, which typically contains several modules (DLLs to be tested). This class derives from TestObject. The Project class exposes the following members:

This assembly contains classes that deal with reading/writing to disk and loading projects. The following classes are contained:

The Parser class is called by the Loader during the loading stage, to parse the string returned by the CallGetUnitTestNames function. The Parser exposes the following members:

The UT class represents a unit test to be loaded, as it was read from the input string of the Parser. It exposes the following members:

TILO is a god from the African mithgology (Tongan tribes of Malawi and Zambia). He is a real busybody. Unlike most of the African gods, TILO likes to be involved. No heavenly ladders and distancing for him. He fusses and gets into furious fits when things aren’t to his liking. But, he is also there to lend a helping hand.

In a similar way to his heavenly counter-part, our TILO always gets involved. Like TILO the God, TILO the Unit-Testing tool implies the embedding of the unit-test cases inside the actual code. Unit-Test Cases are code: driver programs used to test the functionality of your code. TILO is free software. You can redistribute it and/or modify it as you like, with the following limitations:

This program is distributed in the hope that it will be useful, but WITHOUT ANY WARRANTY; without even the implied warranty of MERCHANTABILITY or FITNESS FOR A PARTICULAR PURPOSE.

We’ll be glad to hear that you are using TILO, so please let us know about it.

Feel free to contact us in case you have a query about TILO.