This class is small, efficient, and is compatible with Win32 API programs and MFC programs as well. 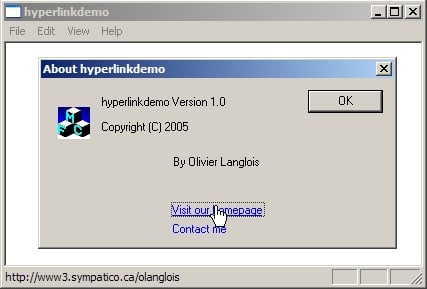 Prior to developing my own hyperlink control implementation, I have been looking around on the net in search of pre-written hyperlink controls. There are a lot around, but none were good enough for my standards. Some are bloated with features that I don’t need and want. Some are plagued with bugs. Some are simple but lack one or two features I wanted to see. The best that I have found is the excellent code written by Neal Stublen. I have been inspired by the elegance that his solution offers; it can be used with Win32 API programs and MFC programs as well. Unfortunately, it has a bug and misses three features I was looking for. For this reason, I decided to write my own hyperlink control code based on Neal Stublen’s work. In this article, I will mention hyperlink options that Microsoft offers, describe the features Neal did put in his code, the features that I added, the bug fix I propose to Neal’s code and some other improvements that I have added.

After the initial release of this article, some readers pointed out that WTL is offering exactly what I was looking for. In retrospect, I still think that it was the right decision to write my own class. One benefit of WTL over my solution is that it is more complete and has more features. However, because a WTL user’s goal is to create small and fast executable files, they would benefit from using my class over the WTL one *if* my class provides all the features they need. In some aspects, WTL implementation has some drawbacks that my class doesn’t have:


I have never used WTL to write a program but if I would, I would use the class described in this article. Microsoft proposes another option for people looking for hyperlink controls. It added such a control to comctrl32.dll version 6, but this version is available only on XP and Microsoft states. An application that has to run on other Windows operating systems cannot rely on the new common control library being present and should not use the features that are available only in ComCtl32.dll, version 6. It might pose a problem if you don’t want to restrict your potential user base strictly to this target.

First, the changes needed for a static control to become a hyperlink that Neal addressed are:


The features that I added are:

Before describing how the new features have been implemented, let me introduce you to the major architectural change that the code underwent. I placed the code into a class. Here is the class definition:

The reasons that motivated this change are:

#1 can be achieved by overriding the OnSelect() and OnDeselect() functions. This will be demonstrated later, when I present the demo application.

This brought me to introduce another improvement. Have you noticed that some members are static? This allows multiple hyperlink controls to share the same resources. Shared resources include the hand cursor and the underlined font. This block has been added to the ConvertStaticToHyperlink() function:

And this code has been added to the WM_DESTROY message handler in the control window procedure:

To the first ConvertStaticToHyperlink() call, global resources will be allocated and when the last hyperlink is destroyed, it will destroy the shared resources as well. The advantages to this approach are that it will make memory usage more efficient and the hand cursor will be loaded just once. Here is the new WM_SETCURSOR code:

Now let me get back to the new features. The simplest one is to change the color of the hyperlink when it is visited. A very simple change to the WM_CTLCOLORSTATIC handler is needed. It just checks a boolean variable state that is set to true when the link is visited. Here is the pertinent code:

To support the keyboard, the following messages must be handled: