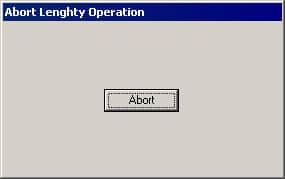 This article shows how to use multithreading to construct abortable lengthy operations, in an MFC environment.

The design and implementation techniques, especially with respect to thread communication and synchronization, can be used in many other classes of multithreaded applications as well.

The multithreading technique is commonly used to avoid blocking a program (for example, GUI responsiveness) when some “lengthy operation,” like the calculation of an algorithm, is to be performed. It is good user interface design to provide the user with an option to abort such an operation. For a lenghty operation to be “abortable” with an immediate response, it must be virtually interruptable at any time. Although not being trivial (such as long-lasting SQL SELECT database queries often cannot be broken into smaller units in an obvious way), this is assumed here.

The Differences Between Worker Threads and User-Interface Threads

When creating a new thread in an MFC application, you generally have the choice of using either a so-called “worker thread” or a “user-interface thread.” Because there is a lot of confusion about these terms, I will describe the differences between the two and explain why I choose to put the “lengthy operation” not in a worker thread, but in a user-interface thread.

A worker thread is created most easily by a call to, for example, AfxBeginThread, with a pointer to the thread function as a parameter:

The endless loop has to be programmed explicitly. This is one of the disadvantages when compared to a user interface thread.

In an MFC environment, it is often necessary for a separate thread to communicate with MFC objects in some way. Therefore, it is sometimes suggested to pass, for example, a pointer to a CWnd instance as a parameter to the thread function. By doing so, this can give you all kinds of trouble in your application. Although possible in principle, it is much more difficult and error-prone to access MFC objects from a worker thread than from a user-interface thread[1].

The term “user-interface thread” (UI thread) is misleading. It suggests that the thread has an user interface. This does not, by any means, need to be the case. A UI thread does not need (as in our example) to have a user interface. It has two primary advantages:

For these reasons, UI threads as secondary threads in an MFC environment are a good choice, often without any user interface. “Without any” is meant here literally, especially with respect to message boxes, to avoid losing messages[2].

In non-MFC, multithreaded environments, you have to use worker threads. NT services, always being multithreaded, are such a class of applications.

A UI thread needs an instance of a CWinThread-derived class to work. As a consequence, it has (among others) the overridable method InitInstance. The message loop is started by returning TRUE from InitInstance. Messages posted to it by PostThreadMessage are mapped to message handlers by the ON_THREAD_MESSAGE macro. Be careful not to use any message boxes (or other windows) in your secondary UI thread when waiting for messages posted by another thread by PostThreadMessage. They can get lost!

Architecture of the Application

Any multithreaded application has to be designed carefully with respect to thread synchronization and communication. Therefore, it is a good idea to make some sort of interaction diagram, to be sure to avoid side-effects like “race-conditions.” 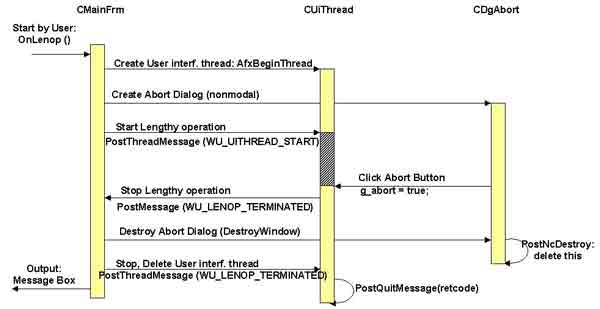 The primary thread with its CMainFrame class starts the lengthy operation when the user clicks the menu item “Lengthy Operation,” the menu handler being OnLenop().

The menu handler creates and starts the UI thread (instance of class CUiThread). The UI thread waits to start the lengthy operation until it gets its start trigger, the user-defined message WU_UITHREAD_START. Before that message is posted by the OnLenop() menu handler, the non-modal abort dialog (an instance of class CDgAbort) is created. After that, the WU_UITHREAD_START message is posted by PostThreadMessage.

Being at this point, we reached the top of the shaded part of the CUiThread bar in our interaction diagram (time flowing from top to bottom). All is arranged now in an orderly way, the abort dialog is created and ready, and the UI thread will start its lengthy operation.

The UI thread signals this by posting the user-defined message WU_LENOP_TERMINATED to the main frame class, using PostMessage, not PostThreadMessage, because the mainframe has a window receiving messages. The return code of the lengthy operation is sent as a parameter of that message.

The mainframe destroys the abort dialog, and signals the UI thread to terminate itself, using the message WU_LENOP_TERMINATED. When the mainframe is sure that the UI thread has been terminated (by calling WaitForSingleObject, not shown in the diagram), it signals a message box to the user indicating either the success or the abort of the operation. The corresponding information is communicated by the UI thread as a termination code (parameter of PostQuitMessage).

To achieve high responsiveness, both threads should have the same priority. This automatically is the case if the priority is not changed explicitly by the program, for example, by modifying the corresponding default parameter value in AfxBeginThread.

The application can be divided in three phases: start phase, running phase, and terminating phase. These phases are described in the following sections.

//post a user defined message to the “lenghty op” user
//interface thread (having no user interface at all)
m_pUiThread->PostThreadMessage(WU_UITHREAD_START,
0,
(LPARAM)m_pargs);
}

First of all, the menu handler checks whether the secondary thread is already running, by simply checking if the (private) member variable is not equal to 0.

The ty_args datatype is a simple structure with parameters passed to the UI thread. It consists of an input value, a return value, and a handle to the mainframe window. The window handle instructs the UI thread the destination where to PostMessage. It simply looks like this:

By posting WU_UITHREAD_START, the secondary thread is instructed to start the lengthy operation.

The start phase of the UI thread simply returns TRUE in InitInstance, starting the message loop.

The abort dialog has no specific start phase.

In the UI thread, the running phase begins with the start message WU_UITHREAD_START from the main thread. The message is mapped to the handler OnStart:

Note the signature of the OnStart handler, having a “void” return code. This is significantly different from handlers for messages posted to windows with PostMessage; their menu handler must have the LRESULT return code. Not observing this results in strange errors like programs running in Debug Mode but not in Release Mode!

For our example, the lengthy operation is trivial. It is a for-loop, checking the global g_abort flag in every round.

After the Running Phase, the UI thread idles until it is requested to terminate itself, again by a user-defined message of the primary thread (mainframe).

The Running Phase of the main thread is functionally split in two tasks: on the one hand the normal application, running concurrently with the secondary UI thread (lengthy operation), and the abort dialog, presenting to the user the possibility to abort the lengthy operation.

Note that in the main thread there is concurrency between the mainframe and other windows of the MFC framework (like views), and the abort dialog. This kind of concurrency is not achieved by using multithreading, but by the design of the window’s message loop, distributing messages to all windows, assuming that the message handlers terminate in rather short time.

The Running Phase of the abort dialog is nearly trivial. It just waits for a user to click the “Abort” button. In this case, the global abort flag is set, and the dialog terminates itself. The self-posting of the WM_CLOSE message closes the window, but does not destroy the dialog. This will be done in the termination phase by the main thread.

Although the abort dialog has no close button, it is possible to close it by other means, for example, by pressing ALT+F4. To prevent this, a private flag (m_closeRequest) is set to indicate the handler of WM_CLOSE the origin of the close request. The dialog is closed only when this flag is set.

In the termination phase, the main thread is responsible for deleting the secondary thread and the abort dialog, and processing the result of the lengthy operation. In our case, this “processing” is a simple message box to the user.

The termination phase is initiated in the main thread’s message handler (called OnLenopTerm) of the WU_LENOP_TERMINATED message posted by the UI thread to the mainframe window.

//signal to the ui thread to terminate itself
m_pUiThread->PostThreadMessage(WU_LENOP_TERMINATED,0,0);

//make sure the thread terminated itself before continuing
//to avoid “race conditions”
WaitForSingleObject(hThread, INFINITE);

//get thread exit code, in case it is needed
//if we do not use the duplicated handle, we get an
//”Handle invalid” error
//Another possibilty to get the exit code is to set the
//thread’s m_bAutoDelete to FALSE, and delete the thread
//manually.
ret = GetExitCodeThread(hThreadDuplicated, &threadExitCode);
if (!ret)
error = GetLastError();

First, the abort dialog is destroyed and the parameter structure is deleted.

To retrieve the return code of the UI thread (such as the parameter of the UI thread’s PostQuitMessage call), it is not sufficient to call GetExitCodeThread with the thread handle. The handle must be duplicated before the thread terminates, by calling DuplicateHandle.

Next, the thread is signalled to terminate itself, by posting WU_LENOP_TERMINATED to it. To be sure that the thread really terminated before continuing, the programmer waits for the UI thread’s handle to enter the “signalled state,” by a call to WaitForSingleObject.

After that, the exit code can be retrieved by a call to GetExitCodeThread with the duplicated handle as a parameter.

The Termination Phase of the secondary UI thread is quite simple: The message handler of the WU_LENOP_TERMINATED message received from the mainframe just calls PostQuitMessage, with a different parameter for normal or aborted termination of the lengthy operation:

The mainframe should get a handler of the WM_CLOSE message to deal with the situation of a running secondary UI thread when a user wants to terminate the application. In this case, a message box is displayed, indicating to abort the lengthy operation first.