Function Calls, Part 4 (What Exactly Is “this”?)

In this article, you will explore a slightly more complex data type, class. You may wonder what any of this has got to do with functions. Suffice it to say that, for now, classes can have member functions, which after all are functions. And, because you are on the topic of functions, take a look at them, a little closer look.

I will not go into what classes are and things like that. I assume readers would be familiar with this already. In this part, you will concern yourself with the member functions of a class.

Looking at the code above, you see the striking similarity in how the function is called in the two cases, member function and non-member function. In fact, that is the case. Member function calls are in fact normal function calls. So, everything I talked about in the earlier parts about argument passing via stack, return value passing, pushing of return address on the stack, all work exactly the same way.

You have the background from the earlier parts on how to analyze this. Start digging in now. 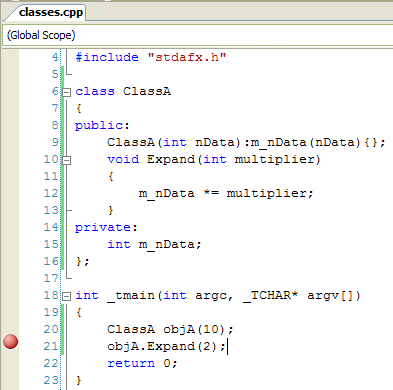 __thiscall is a calling convention for calling class member functions. It is the default convention the compiler will use if nothing is specified explicitly. The __thiscall convention is characterized by the following:

gets the address to objA into EAX.

loads the contents of DWORD at offset 0 from the address of objA. As you see, objA has only one data member, so this means that the statement above is fetching the m_nData value.

that one is the multiplication operation. The [EBP+8], as you know from Part 3, is the location of the first argument to the function Expand.

Again, you see [ebp-4] being used. This means that, again, the compiler is trying to reach the objA data. If you look at the source code, it makes perfect sense. You need to set the result of multiplication to m_nData. That is what the instruction above does.