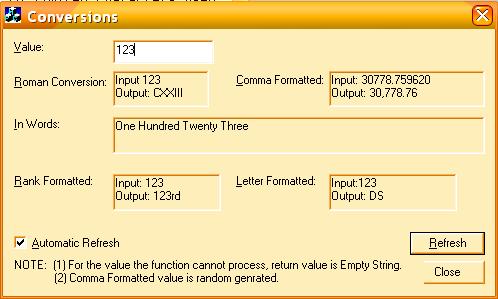 In this article, I present several algorithms to convert a given number in different display formats. Here, “display format” is from a user’s point of view, not just converting values into alignment and rounding displays.

Although the code is written in VC++ and has used MFC’s CString class exclusively, the algorithms in a general sense can be used in any language. Needless to say, each language and tool would require significant modification to the algorithms themselves apart from coding.

Here is list of all functions provided in the sample, with brief descrpitions of all:

I hope that there would be problems with CommaFormat because it processes a double value. Also, ConvertToWords converts in International convention, which is not used in India. Indian convention is unique and is not used except in India (and perhaps its subcontinents). Any reader may request Indian conventional code from me.