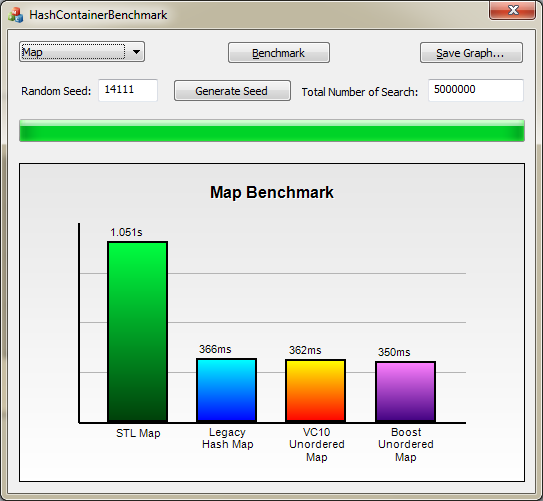 Red-black binary tree is a very fast search tree data structure: it can find any item in 4 billion items in 32 steps or less. Its O notation is O(log n) while hash container’s average case is O(1) and its worst case is O(Total number of elements). The only time the hash container’s time-taken-to-search is not O(1) is due to the searched item shares the same hash with other different item(s) and the hash container has to compare them one-by-one to find a exact match. For more information on the performance comparison, look at this Boost library link.

For the map and multimap benchmark, the key in key-value pair is a word(string) in English dictionary while the value in key-value pair is a random number. This is okay because the value is not used in the search. For the set and multiset benchmark, the element is a word(string) in English dictionary. Set is a data structure similar to map without the value pair. The multimap and multiset, unlike map and set, allows the same key/element to be insert more than once and doesn’t enforce the uniqueness. The reason I use std::wstring for the key/element because hash containers has a predefined hash function written for std::wstring. If I use my own custom data types, I may have to write my own custom hash function.

The benchmark are done over 5 million searches. The lower the score, the better it is. 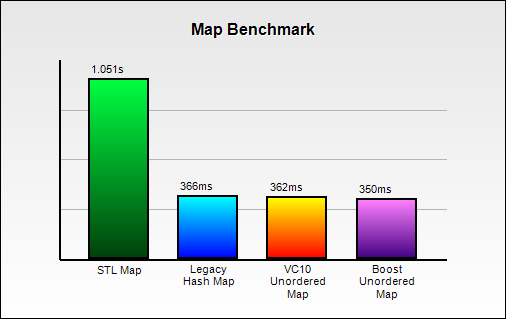 The benchmark are also done over 5 million searches. The lower the score, the better it is. 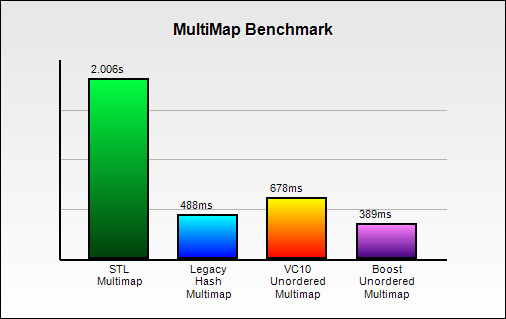 We can see Boost unordered multimap timing is 4 times better than STL multimap.