Refer to these articles for more information regarding Timers:

The application that you will build today will achieve two things: 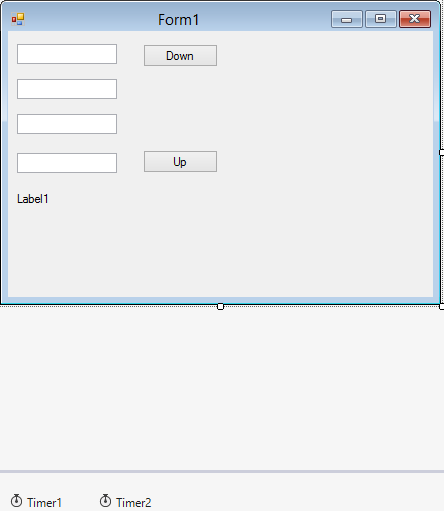 These two variables will be responsible for calculating the time left on our little “alarm clock.”

Add the following code inside the Form_Load event:

Here, although it should be glaringly obvious, I set the starting values for the hours, minutes, and seconds. The countdown will start from whatever values the user enters inside these respective textboxes.

Add the following code to the button labeled “Down“:

Inside the button’s click event, I set the ending point for the countdown timer. By the looks of it, it initially probably does not make sense at first. Why? Well, the first line of code simply initializes the timeEnd variable, not the actual ending time!

The few variables that get created when this button has been clicked will control and set the values to the timeEnd variable. Whatever has been entered inside the respective textboxes gets converted to a double object, then via the timeEnd’s AddHours, AddMinutes, and AddSeconds methods I set the exact ending time.

To make this work, add the Timer’s Tick event:

If you were to run the application now, you would see it counting down from whatever time value you have supplied, as shown in Figure 2: 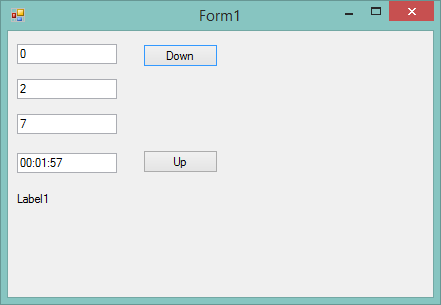 Add the next modular variable:

Add the next code segment:

Comptime calculates the exact time via the use of Environment.TickCount. Now, add the final piece of the puzzle:

Again, I calculate the time difference, except for now it works forward and not backwards. I created a few objects, and then here is the fun part! How good is your math? No, just kidding; it doesn’t have to be so good to be able to understand the underlying logic here.

calculates the hourly difference. I took 3600 * 999 then divided by the time difference and then used modulo 24. Now what does that mean?!

Let me break it down:

The last line of code simply formats the computed values into a displayable string. When run, your application will resemble Figure 3: 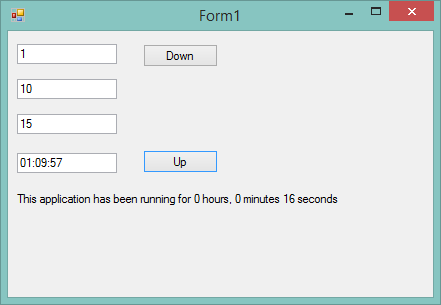 I have included a working sample with this project. I hope you have benefited from this article.