Web scraping is a term that is becoming increasingly popular in the development world. It could because developers always tend to try to make things more and more convenient for users. At first, I wasn’t a big fan of scraping because it can be used to obtain data not intended to be had by a user. Today you will create a program to scrape text from a website.

Here is a nice definition of Web Scraping

Open Visual Studio 2012, and create a VB.NET Windows Forms project. Name it anything you like and design it as shown in Figure 1. 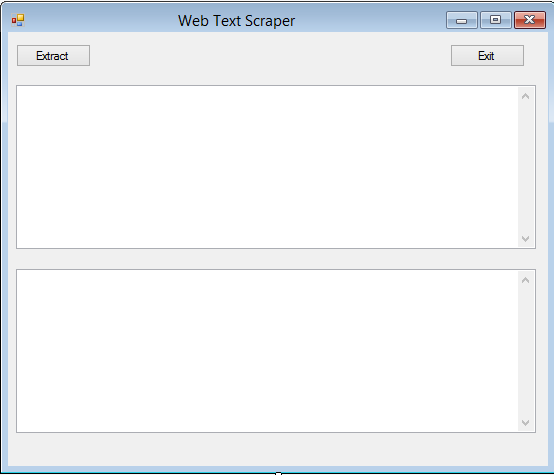 Not much coding. Be warned though, that doesn’t mean that the code you will learn today will be easy. Nothing worthwhile is ever easy. Now, you’re not here to learn about my life lessons, nor philosophy. Let’s get the show on the road.

Add the following Imports above your Form’s class definition:

You will use the System.Text and System.Text.RegularExpressions namespaces to manipulate the HTML tags of the webpage being read. HTML tags are in a specific format: HTML tags are usually enclosed within <> signs. Apart from the ordinary HTML tags, there might be certain script languages such as VBScript, JavaScript, ASP and PHP also involved in a website as well as CSS (Cascading Style Sheets – which aid in the formatting of web pages). We need to take all of these factors into consideration when dealing with web pages.

The System.Net namespace provides objects such as the WebResponse object that provides a certain response to a calling application, and the HttpWebRequest, which enables us to understand the HTTP text. HTTP stands for Hyper Text Transfer Protocol. This protocol deals solely with web pages. You also get other Protocols such as the FTP (File Transfer Protocol) but that is a topic for another day.

The System.IO namespace will give you the StreamReader object, which you can use to read any stream of data.

Let’s put all of these technologies together. Add the following sub to your application:

Let me break my logic down for you. I created a string object to hold the URL (Universal Resource Locator, in layman’s terms it means a web address) from which I will be scraping text. In this case it is Codeguru.com. Next I created a WebResponse object and an HttpWebRequest object. The HttpWebRequest Object creates a request to the specified URL. After I create the request, I send it via the WebResponse object. This object returns the text sent from the HTTP protocol back to us. Now, the tricky part…

To finish up, you need to call the Scrape sub. Add this code now:

Very interesting stuff indeed! As you can see, it is very easy to scrape text from websites. All you need is a basic understanding of HTML and VB.NET. If you are interested in downloading images from websites, you can have a look here. Until next time, cheers!