Ah, DOS… I remember growing up playing DOS games; yes, I am that old! The very first time my dad brought home a computer, we were so excited. It was not the first time I had seen a computer, because I was accustomed to accompanying my dad to work sometimes.

In any case, we played so many games: Police Quest, Space Quest, Outrun, Streetrod, Test Drive. I feel quite strange saying this, but I still have fond memories of those games. My very first game I ever played on a computer was Xonix.

I guess the point that I am trying to make is: DOS still has a soft place in my heart, as I am sure many of you will share the sentiment. I should probably start with the article, shouldn’t I ?

Today, I will teach you how to simulate the DOS Command Prompt window from a Visual Basic form.

The DOS Command Prompt is a command line interpreter application available in most Windows operating systems. Command Prompt is used to execute entered commands. Most of the commands are for batch files and to automate tasks via scripts, troubleshoot and solve Windows issues, and to perform advanced administrative functions.

Open Visual Studio and create a new Visual Basic Windows Forms project. Add one button and two textboxes to your form, as shown in Figure 1. 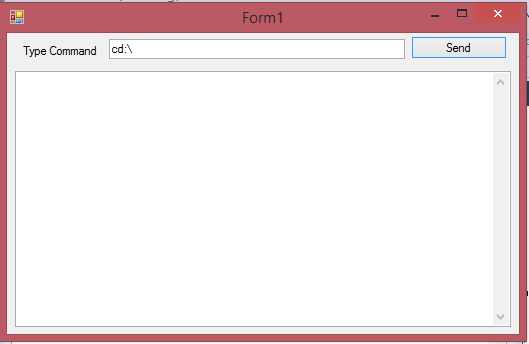 Add the IO Namespace because we will be manipulating some text:

strResults will be used to store the results of the output from DOS. ShowText makes use of a delegate named delRefresh that will in turn make use of another sub that we will define a bit later.

Add the following code behind the button labeled ‘Send’:

In this event, I spawn a new thread that will execute the following sub procedure:

Because this is running in a thread, it continuously checks for input commands and then ensures that the output displays correctly. This happens when the ShowText sub gets invoked. Let’s add the ShowText sub procedure now:

This is straightforward, but I will still explain it. All that happens here is that the results from the input DOS command get displayed in the txtResults textbox.

DOS will always have a legacy, and knowing how to play with the Command Prompt can come in quite handy.