In Part 1 of Comparison Between VB 6.0 and VB.NET Objects, you looked at the differences in the Properties Windows. This article, Part 2, compares the most obvious and common features between the VB 6.0 and VB.NET Toolboxes, based on these aspects:

The General tab of the Visual Basic 6.0 Toolbox displays the standard Visual Basic controls plus any ActiveX controls you have added to your project.

With the General tab, you can:

For the MDI Tab, you could include the following controls.

The following controls are contained within the Microsoft Windows Common Controls 6.0 (SP4) set of controls:

Your MDI Toolbox tab should now look like that in Figure 5:

To rename and delete tabs from the Visual Basic 6.0 Toolbox, right-click on the Tab name, and choose the desired option from the displayed menu, as shown in Figure 7.

that you can add to your Visual Basic 6.0 project. 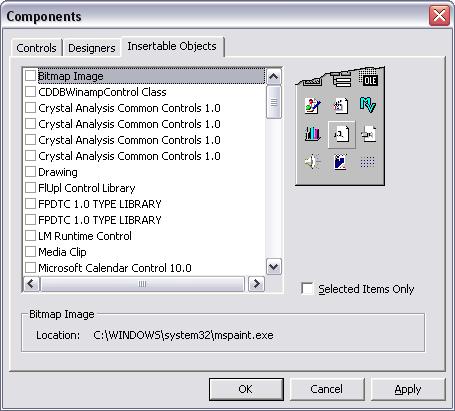 A Control Array is an indexed group of similar controls that are of the same type and have the same name. Individual elements within the control array are identified by a unique index number.

Now, you can create a control array of CommandButtons.

Now that the control array is created, if you go to the Properties window and display the Object drop-down list, notice that there are now two (2) CommandButtons with the same name, cmdControlArray, each with its own subscript.

By following Method 3, you now are able to dynamically add CommandButtons to the Control Array at run time. New controls are exact duplicates of the first control element of the control array. The values of all properties except Index and Visible are identical—including the values of Left and Top. Thus, when you create a new control, it will be placed right over the first control in the array. For the new control to coexist with other controls in the array, you must move the control to a new position.

When you run the code, notice that the program creates a new CommandButton on the form and places it just below the first.

For example: Double-click your cmdCommandArray button on the form. Your Code Editor should now have a procedure similar to the following:

Notice the above Index argument, now included in the CommandButton’s event handler. This is how you distinguish between the elements of the control array, usually with a Select Case statement. A small example follows:

When the above code is run, you will notice that you are able to click on both buttons, and both buttons display a different message, indicating which button was clicked.

Now, look at how the Visual Basic .NET Toolbox changed, and how you can accomplish the same functionalities.