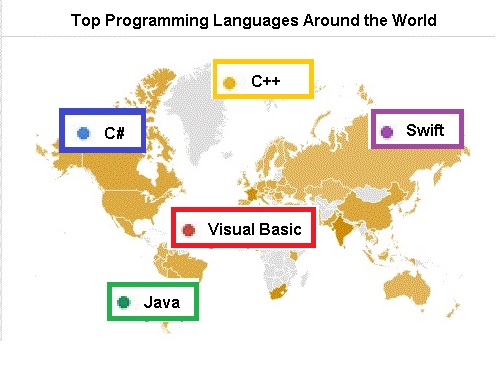 There are a variety of ways to determine what programming language is most popular. One is to do surveys and simply ask people what they think is most popular. We’ve done that on our developer sites. Another method is using the Tiobe index listings.

The C++ language (including C) continues to be popular around the world. India tends to be the highest trending area for searching, followed by France and South Africa.

Although C++ is popular around the world, it is not popular everywhere. You can see by the darker shading where it is the most popular.

Java tends to rule the Tiobe charts; however, when you take at look the Trends data, there are areas where Java is not established. Like C++, however, India is near the top with Bangladesh actually having the highest trending for Java. The U.S. does not appear in the top five.

You can see that the highest areas that are trending are substantially darker, with a quick fall off across the top five countries listed in the previous slide. The darker shading represents where Java is the most popular. 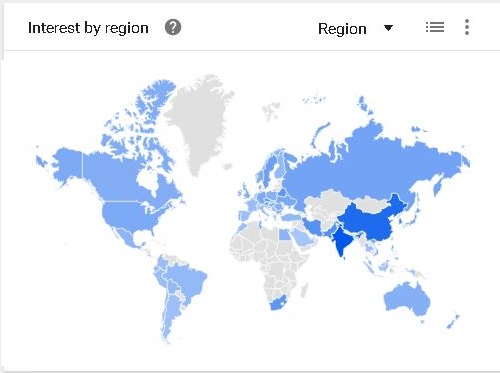 The C# language is one we cover a lot on Codeguru and some of our other sites. Like the previous languages, India is where this language is trending the strongest. What you also will see, however, is that China comes in at number two for C#.

C# is also popular around the world; however, there are areas of Africa where it doesn’t show. As with the previous two languages, the United States again is not in the top five and shows in a lighter shade. The darker shading indicates the more popular.

Visual Basic is a language that continues to try and hold its own. What is interesting with Visual Basic is that it is the only language of our five that does not have India listed in the top five. In fact, if you look at the previous slide, the countries where Visual Basic is popular are more unique than those in the other slides.

Swift is now being used in place of Objective-C by a lot of iOS developers. As such, it has gained in popularity and has also had a big bump in how it is trending. You should take a guess at how you think it is trending relative to the other four languages covered. The last slide will show you where it is positioned.

Swift is popular in many of the same countries as the other languages. Although the U.S. looks pretty dark in the above slide, it still doesn’t make the top five countries. The Philippines, followed by Singapore and Indonesia, are the top three, with India coming in fourth. 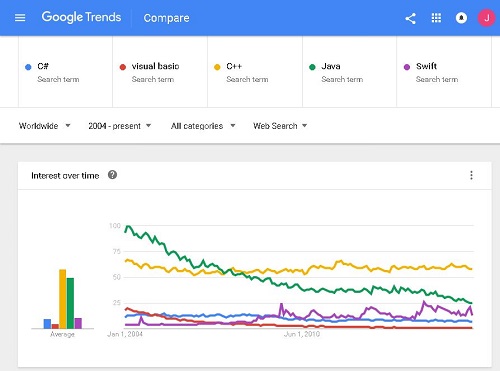 Trending is most interesting when you compare the five languages together. C/C++ continues to trend on a pretty steady path, and at a high level relative to most languages. Java has fared the worst in that it has gone from being higher than C/C++ to being well below. In fact, Swift has trended higher in recent months than where Java is now. If both continue on their paths, Swift will likely overtake Java. Of course, C# has also trended relatively flat, but at lower numbers. Visual Basic has dropped the most in that it has fallen below C# and Swift to take the bottom position of the five languages.

Of course, this is data based on Google Trends, which is relative to what people to how people are searching. Like the Tiobe index, this is somewhat of a flawed way to look at language popularity. Even so, the data is interesting. If you have any thoughts on the data, comment below! 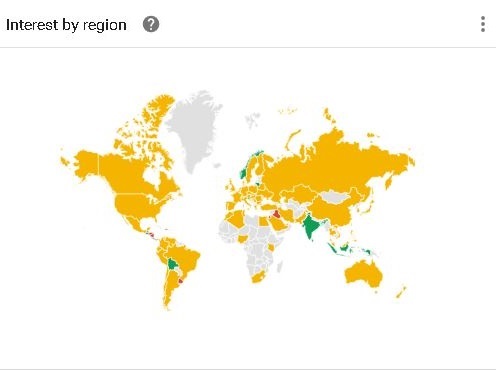 In this final slide, you can see that the most popular trending language in each country by color. C/C++ is predominant across the world, with Java (green) being in several countries as well. Finally, VB shows up in a few spots in red.