When Intel Corp. introduced its new platform for the Internet of Things (IoT) in late 2014, the world’s largest processor manufacturer was seeking to secure a foothold in the growing IoT industry by making an impact in the realm of Big Data analytics.

Intel described its platform as “an end-to-end reference model and family of products from Intel, which works with third-party solutions to provide a foundation for the seamless and secure connection of devices. The model delivers trusted data to the Cloud, and ongoing value through analytics.” The platform focuses on security, interoperability, scalability, and manageability to facilitate IoT deployments.

In branching out from their niche of computer chips, Intel formed partnerships with a number of industry heavyweights, including Accenture, Booz Allen Hamilton, Capgemini, Dell, and many more. 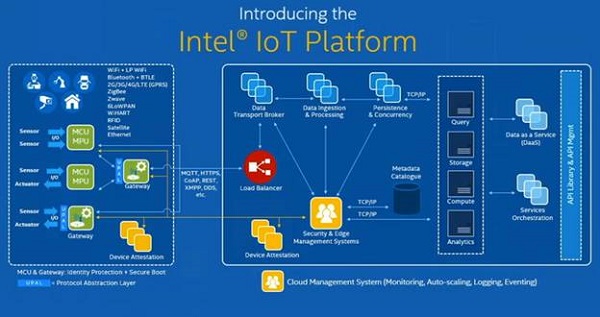 Intel is wooing Big Data developers by beefing up its Cloud analytics support for IoT Developer Kits, including several new products such as the Intel IoT Gateway series. “To get value out of the data generated in deployments using the Intel IoT Platform, developers need a powerful yet easy-to-use approach to big data analytics,” the company said. “Cloud analytics enables IoT application developers to detect trends and anomalies in time series at Big Data scale.”

Raspberry Pi is likely the best-known, single-board PC in this market, but Intel also has had a strong presence there. In fact, Intel has had a number of products on the market aimed at the do-it-yourself IoT user, including its Galileo, Edison, and Joule boards. However, the company recently announced that they will be pulling out of the DIY market, or at least dropping these particular products. According to Intel, Galileo, Edison, and Joule will remain available for now but will no longer be shipping after 2017.

Having said that, the developer kit page features a stunning array of kits for a variety of applications, including:

As far as your own hardware goes, as long as it can communicate in one of the following supported wired and wireless communications protocols and standards, you’re good to go:

Apps and services can scale across different platforms by using secure APIs.

Your choice of operating system will determine how your device is managed, the scalability of the product, as well as the cost of deployment and maintenance. Following are the operating systems available on Intel boards:

The challenge to connecting a multitude of sensors over many different communication protocols is addressed by using an IoT Gateway. It: The key to delivering on the IoT promise is sensors: software-defined technology that gathers data from devices, environments, people, robots, and machines that enable edge visibility and Cloud-based analysis.

Developers can add their own sensors to the UPM sensor framework—one of the largest available collections of IoT sensors. By doing so, developers get to increase exposure to other IoT developers and innovators worldwide, access tools and expertise to accelerate time to market, and reduce the learning curve.

Developers also may use the many diverse sensors in the library by following simple step-by-step instructions designed to streamline the development process. Finally, there’s an Intel® IoT Developer Kit that includes easy-to-use hardware, software, tools, and Cloud services.

Intel’s sensor framework also features a number of industrial-grade sensors from companies such as Veris, Comet, Semtech, Bosh, Aeon Labs, Honeywell, and many others. These include thousands of basic LEDs, buttons, and switches to complex sensor and actuator devices—all of which are supported for industrial, scientific, medical, and professional applications, thanks to the APIs provided by the MRAA and UPM libraries.

The crown of analytics is to not only observe, but also predict future trends based on data patterns. For example, when might a wind turbine require maintenance? In doing so, getting quality data from every component, from the smallest sensor to the largest server farm, plays an invaluable role. To that end, Intel is keen on optimizing performance of every component. They also develop algorithms, architectures, and tools for predictive analytics.

Intel’s IoT platform makes it easier to collect, analyze, and act on data generated by a wide array of endpoint devices. For instance, on the network, Wind River Helix Device Cloud collects and manages data from devices and machines to increase operational visibility and intelligence.

Big data analytics are provided on open-source Hadoop and OpenStack for use with private Cloud or major public Cloud providers. 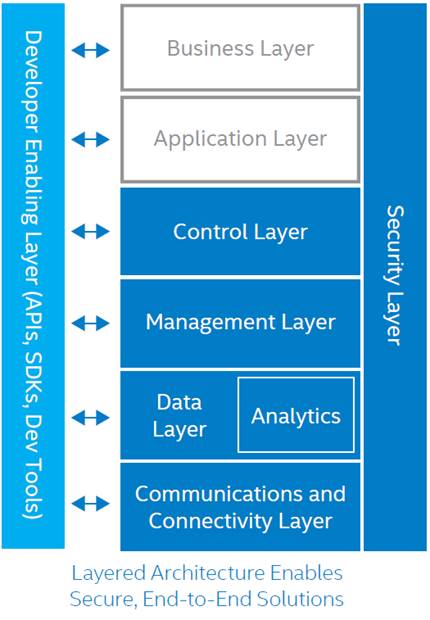 Intel® security solutions are meant to provide end-to-end protection across the entire IoT platform. Their hardware and software fortified security creates a chain of trust, from thing to network to Cloud. Doing so protects data from theft and tampering and ensures that only trusted data is analyzed, while facilitating attack detection.

Intel helps developers mitigate risk by offering various security products that can be deployed on things, including:

Transforming your prototype into reality means optimizing it to production-level requirements—whether you are creating a few commercial devices or thousands.

A prototype must undergo a number of changes before it is production ready.

The developer must choose hardware from a range of pre-certified modules, Gateways supported by ODMs, and even custom boards.

Components for boards depend on several factors, including:

You’ll probably end up rewriting your code as the product develops.

Software has to handle security, scalability, and device management.

Intel’s IoT gateway makes it easier to manage and update devices securely. Moreover, the same development languages, OSes, tools, sensor libraries, and Cloud services used to build your prototype can be leveraged as you move into production.

Code can be repurposed rather than having to start from scratch.

Being and end-to-end platform, it can be difficult to ascertain the cost of jumping in with both feet. Whereas software offerings like IDEs, SDKs, and APIs are free to download, other components, such as security services, are not. Prices are not listed online, so you should contact Intel with your specific requirements.

The IoT Developer Kits include: hardware such as boards, sensors, and actuators; software tools including images or packages; support for leading IDEs such as Eclipse, Intel XDK IoT Edition, Arduino, and Wyliodrin; Cloud services; and additional tools and products to boost optimization and performance.

The Intel API and Traffic Management solution enables the creation of building blocks to ease building of new software applications. Developers can use Intel Mashery API management tools to build data APIs that can be shared internally or with partners, or it can be monetized to create revenue-generating data services.

Integrated Development Environments (IDEs): Intel® System Studio IoT Edition: This Eclipse-based IDE comes with the built-in capability to easily integrate sensors via UPM and MRAA libraries, which you can develop in C/C++ or Java.

Most recent update/stable release: Varies by product and/or service

License: Software is free to use. Other products are charged based on the number of nodes and/or term length. Please see the Intel IoT Platform Marketplace for more details.

Intel’s IoT platform enables customers to quickly build industry-specific IoT solutions as well as integrate enterprise IT systems, utilizing API management. Moreover, the Cloud-based middleware, which runs from the things up through the Cloud, helps reduce time to market and total cost of ownership. With all of this going for it, Intel’s IoT platform is a worthy contender to the IoT playing field.