First, examine a generic function—GetEmailAddresses—that takes as its only argument an input string and returns an array of found e-mail addresses. The e-mail regular expression pattern utilized in this function is very basic, but it “catches” the majority of e-mails you run across:

The first thing the GetEmailAddresses function does is construct an ArrayList object. This object is returned to the caller of the function, and it holds all of the e-mail addresses located in the passed input string. From there, the static Regex::Matches method is called with the desired e-mail pattern (which I’ll cover shortly). The result of the Matches method is a MatchCollection. The MatchCollection object is then enumerated with a for loop, each “match” (representing an e-mail address) is added to the ArrayList object, and finally the ArrayList is returned to the caller.

The GetEmailAddresses function can be used as follows where the returned ArrayList object is enumerated and each e-mail address is written to the console:

The pattern used in the GetEmailAddresses function correctly yields the two addresses I specified in the sample call. The following is the pattern itself (with the double backslashes replaced by single backslashes, as that’s specific to C++ and not really part of the actual pattern):

If you’ve read the previous installments of this series, you hopefully can read this pattern. Here’s a breakdown of each component of the pattern: 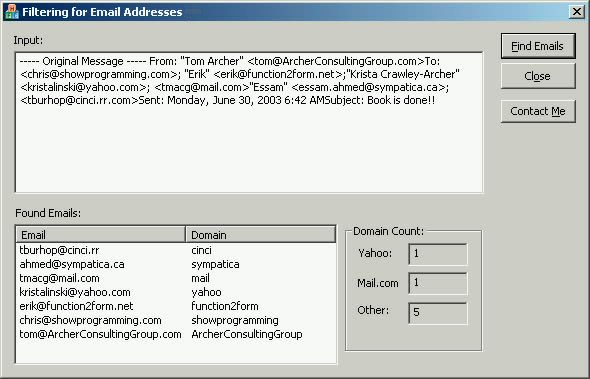 Figure 1. Example of Parsing a Body of Text for E-Mail Address & Domain Information

While the previous e-mail pattern would catch most of the e-mail addresses, it is far from complete. This section illustrates a step at a time how to build a much more robust e-mail pattern that will catch just about every valid e-mail address format. To begin with, the following pattern catches “exact matches.” In other words, you shouldn’t use it to parse a document, but rather to validate a single e-mail address:

Personally, I find it easier to read a pattern by dissecting it into components and then attempting to understand each of the components as they relate to the overall pattern. Having said that, this pattern breaks down to the following parts:

In order to test for “direct matches,” you need a very simple function like the following:

Now, tweak the pattern so that it can be used to parse a document for all of its contained e-mail addresses:

The main differences between this pattern and the previous one are the following:

So, the natural question at this point would be “Is this pattern guaranteed to find every single valid e-mail address?” After doing quite a bit of research on this issue, it turns out that an all-encompassing e-mail regular expression pattern is almost 6,000 bytes in length! However, that pattern would be necessary to catch only a very miniscule percentage of e-mail addresses that the patterns illustrated in this article won’t. The two patterns that I’ve covered will catch 99 percent of all e-mail addresses.

Regular Expressions: A Lot of Ground to Cover

My original intention for a series on using the .NET regular expressions classes from Managed C++ was to simply cover some basic patterns and usages. However, the more I wrote, the more I realized needed to be covered. So, it turned out to be a much-longer-than-planned series. It covered splitting strings, finding matches within a string, using regular expression metacharacters, grouping, creating named groups, working with captures, performing advanced search-and-replace functions, and finally writing a complex e-mail pattern.

Hopefully along the way, those of you who are new to regular expressions saw just how powerful they can be. Just think of how much manual text parsing code would be necessary to parse a block of code for (almost) every conceivable e-mail address. Compare that with the single line of code it takes with regular expressions! For those who wish to learn still more about working with the .NET regular expressions classes, my book—Extending MFC Applications with the .NET Framework—provides a full 50-page chapter on the subject and introduces half a dozen demo applications with code that you can easily plug into your own production code.

I would like to thank Don J. Plaistow, a Perl and Regular Expressions guru who helped me tremendously when I first started learning regular expressions. Don’s help was especially helpful with regards to the email patterns in this article.