By Wikipedia’s definition, an acoustic fingerprint is “a condensed digital summary, a fingerprint, if you will deterministically generated from an audio signal, that can be used to identify an audio sample or quickly locate similar items in an audio database.”

A great example of audio fingerprinting in the wild is to consider the popular Shazam app. Using Shazam, a person can be anywhere – on the street, in their home, at a restaurant – and hear a song. They can use the app to “listen” to the song they are hearing and then receive information about the song, such as its title and who performed the song. This process is achieved using audio fingerprinting.

To better understand what an acoustic fingerprint is, let me explain some common terms:

A fingerprinting algorithm is a procedure that maps a large data item to a much shorter bit string keeping its fingerprint that uniquely identifies the original data. A deterministic algorithm will always produce the same output, with the underlying machine always passing through the same sequence of states. An audio signal is simply a representation of sound.

What is Acoustic Fingerprinting?

Needless to say, acoustic fingerprints can be used to monitor the use of specific musical works and performances on a radio broadcast, records, CDs, streaming media, and peer-to-peer networks.

For this to work, you need to generate a signature from the audio, or else you won’t be able to search by sound. This can be achieved by creating a time-frequency graph called a spectrogram. A spectrogram – also known as a sonograph, voiceprint, or voicegram – is a visual representation of the spectrum of frequencies of a signal as it varies with time. The data is represented in a three-dimensional or 3D plot.

An example of a spectrogram is shown below: 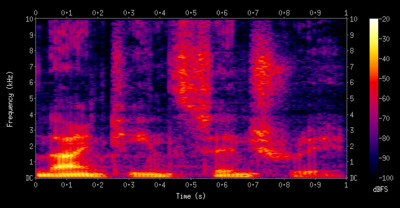 In the next article of this series, we will start building our project to identify audio input. You can read part two of this article by visiting Sound Fingerprinting and .Net Part 2.