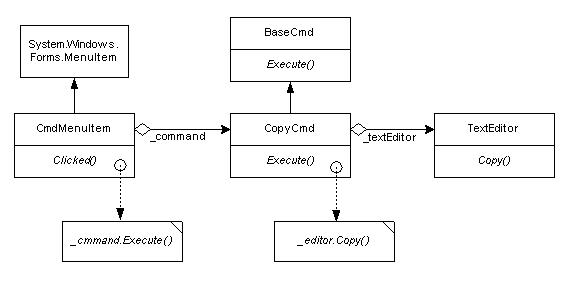 With Visual Studio.NET IDE, one can easily add user interface objects such as menus and toolbar buttons to a form and let the IDE generate event handlers skeleton code in the form’s design window to handle the events triggered by pressing toolbar buttons or selecting menus. Although this automatic code generation makes the user interface design and coding very easy, for a large, complex Windows application, a great amount of event handling code is dumped into the form class and makes the form class code increasingly bulky and difficult to maintain. From the viewpoint of object-oriented design, this is also not a very good design and the code cannot be re-used.

Buttons or menu items usually carry out a request in response to user input, which then causes an action to be invoked. The command design pattern lets these user interface objects make requests of unspecified application objects by turning the request itself into an object. This object can be stored and passed around like other objects. This separation of user interface objects from the receivers of the requests makes the code easy to maintain and promotes code re-use.

This article gives an example of an implementation of the Command pattern using C# in a Windows application.

The CmdFactory command factory class has a reference to TextEditor and provides factory methods to produce command objects.

The Base Class of the Command Classes

The BaseCmd class is the base class of all other command classes. It has references to TextEditor and CmdFactory objects and an abstract method, Execute().

The Concrete Command Classes That Do Not Support Undo

Note In the Execute() method of CutCmd, a new instance of CutCmd is created by the command factory. The method calls TextEditor's Cut() method, passing this CutCmd object as the parameter. This is because with each "cut" operation, a CutCmd object needs to be pushed into the command stack of the Undo command object for a possible undo operation. The Cut() method of TextEditor shows how it is accomplished:

Read more
Previous articleThere is More Than Just a Little Touching…
Next articleOP-ED: Software Development from Core to Cosmetics