Get Ready for Windows Workflow Foundation

During its long and storied history, Microsoft has had a number of forays into the world of workflow. The company has built workflow solutions for Microsoft Exchange, another in Dynamics CRM, and others within BizTalk, SharePoint, and Content Management Server. However, each of these was generally more for utility use, or it was fragmented, incomplete, or considered more of a false start. Often, third-party products were required to provide true workflow within Microsoft-based solutions.

To bring workflow to the masses and allow for long-running workflows in applications and servers, Microsoft will introduce the much-anticipated Windows Workflow Foundation (WinWF) as part of the .NET Framework 3. WinWF provides a workflow engine, a programming model, and a set of tools for rapidly building workflow-enabled solutions. It offers a single workflow technology for Windows that serves as a base for Microsoft products as well as ISV and customer solutions. Microsoft itself will be utilizing WinWF in the near term to workflow-enable several Microsoft products such as Microsoft Office 2007 and Microsoft BizTalk Server.

While providing only a framework to build on—not an application or server, WinWF is intended as a common platform for Microsoft, ISVs, and others (including you) to build workflow into applications and workflow-enabled servers. In fact, many workflow vendors are rebuilding their products to sit on top of WinWF and provide additional capability.

This article explores WinWF and describes how to build a sequential workflow, which is one of the several workflow types supported by the Microsoft .NET Framework 3.0 and Visual Studio 2005. To build the examples, you need the following components:

I personally downloaded them and set up a .NET Framework 3.0 Virtual PC environment, which I’ve found to be a good practice for trying out new things without risk of messing up my current environment.

Within WinWF, Microsoft defines a workflow as a set of one or more activities that coordinate people and/or software. At their heart, workflows are a set of activities that run within a host process of any application or server. They are a map of activities with a control flow as well as support for dynamic change. An application hosts the workflow, runtime services within .NET support persistence for long-running transactions, and the workflow runtime controls instances of workflows.

There are two different workflow scenarios based on the participant types. In human workflow, participants are people and roles. A person must be involved in the process in some form, and the process typically flows dynamically, needs to be flexible, and likely involves documents of some type. The alternative is system workflow, where the participants are applications and services. It is more of a structured flow of data, fairly prescriptive from system to system, and likely transactional in nature. In the past, Microsoft provided system-to-system workflow through Microsoft BizTalk, but didn’t have a good answer for human workflow. WinWF will serve as the core for human and system workflow.

A base activity library provides out-of-the-box activities, but you also can write custom activities or obtain them from third parties. The following are some of the library’s common activities that you can use to arrange a workflow:

As you can see, the activities offer some powerful capabilities by default. Activities can support transactions and sequential control, along with being rules driven. The declarative rules support within activities is very powerful becayse it allows you to alter or change the logic without recompiling code.

The WinWF engine is designed to allow declarative and programmatic authoring of workflows. Declarative definition is when XML markup is used to define the workflow structure, logic, and data and the workflow compiler turns it into physical objects. This is significant because it will allow for non-developers to be workflow authors through tools such as the Microsoft Office SharePoint Designer 2007, which allows the user to draw a workflow and then runs it through the compiler automatically.

When authoring workflows in Visual Studio 2005, you have the options of keeping the definition and the code in the same file or having code separation with the workflow definition expressed as XAML and the user code contained in a separate code file. I traditionally prefer to use the code-behind concept and stick with it.

As previously mentioned, a sequential workflow involves a prescribed processing order that relates closely to a flowchart model. For demonstration, this article creates a sequential workflow that includes a single code activity that writes the phrase “Hello World!” to a Windows console. Follow along and you will learn how to set up a workflow and practice debugging it.

Take the following steps to create a sequential workflow within Visual Studio 2005:

Figure 1 shows a screenshot of the workflow designer with the single activity. 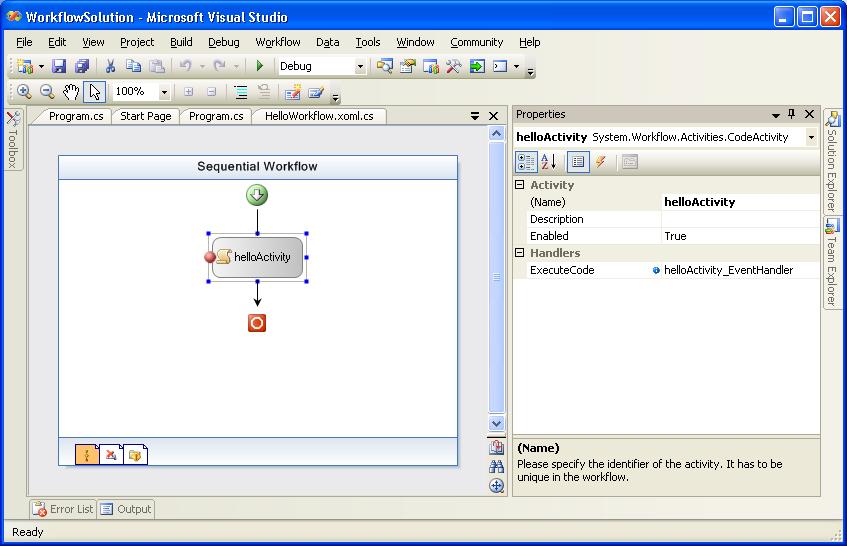 Here is a copy of the code that was created in my project:

You should see a Program.cs that contains the main execution point for the console application and autogenerated code.

Here is the code from the HelloWorld.xoml.cs code behind file:

This is a fairly simple example that gives you an idea of how to build a sequential workflow. You could expand it to use the IfElse activity to display the “Hello World!” text based on various languages, or you could further explore other activities.