Choosing Between MVC and MVP Patterns in ASP.NET

Lately, ASP.NET developers have been paying increasing attention to the architectural aspect of their applications. However, little effort usually is done to choose the right architectural solution. Developers often make a blind choice in favour of the Model-View-Controller pattern and, specifically, ASP.NET MVC framework, disregarding other possible solutions.

Nevertheless, alternative architectural solutions, such as Model-View-Presenter and corresponding frameworks (MVC#, for instance) do prove themselves more useful than MVC in many situations. That is why ASP.NET developers and architects should be aware of all advantages of MVP pattern over MVC and vice versa to choose the appropriate pattern to be used in a specific application. This article provides guidelines for ASP.NET developers on choosing the right pattern among MVC and MVP, concerning all major differences between them.

Most ASP.NET user interface controls rely on the server-side event model to process user gestures. When a user clicks some menu item or a button on a web page, a server-side event gets generated and then handled on default by a View class (Web form class). Thus, the View is the best place to receive user input for most ASP.NET UI libraries, both standard and third-party (such as DevExpress or Telerik Web controls).

However, as seen from the picture below, the Model-View-Controller pattern bypasses the standard ASP.NET request processing scheme, because the incoming gestures in MVC are received by the Controller. Moreover, the form of user requests in the ASP.NET MVC framework (which is based on a URI pattern) makes it difficult to adapt this framework to use with the conventional ASP.NET server-side event model. And, although there are a number of UI libraries compatible with MVC pattern (for example, the Yahoo UI library), generally MVC is not fully suitable for most ASP.NET UI libraries. 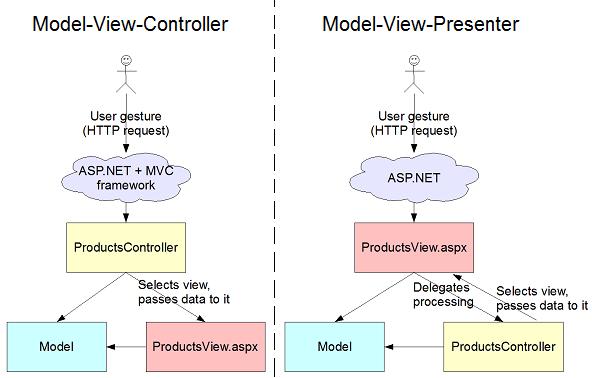 The Model-View-Presenter pattern, on the contrary, assumes the View to receive user gestures and then to delegate processing to the Controller. Such a scheme comfortably fits most ASP.NET UI libraries.

To sum up, a developer should consider whether the desired UI library relies on the standard ASP.NET server-side event model. If it does (which is most likely), MVP would probably be a better choice.

According to the Model-View-Presenter pattern, a Controller has a constant link to the associated View object. This allows a Controller to access its View at any moment, either by getting or setting some View properties.

The Model-View-Controller, on the other hand, provides limited capabilities for communication between the Controller and the View. MVC requires passing all data to the view in a single call, such as Render("OrdersView", ordersParam1, or ordersParam2).

Thus, if an application needs extensive communication between Controller and View objects, MVP is more preferable than MVC.

3. Portability to other UI platforms

Many applications are initially designed to work under tbe Windows platform, and later they get ported to the web environment. Other applications are constructed to operate under multiple UI front-ends from the very beginning. Anyway, portability to other presentation platforms is a question of great importance for numerous systems.

And again, MVP shows itself as a better choice because it is compatible with various UI platforms. For example, MVC# Framework currently supports Windows Forms and ASP.NET Web Forms technologies, and Silverlight with WPF is on the agenda. The MVC pattern, quite the contrary, is good mainly for web applications and hardly fits other presentations.

Therefore, if an application needs or later will need support for multiple GUI platforms, MVP would be the right solution.

The Task concept belongs neither to MVC nor to MVP paradigms. However, it is included in some MVC/MVP frameworks for its usefulness. Task is a set of views that a user traverses to fulfil some job. For example, an airline ticket booking task may consist of two views: one for choosing the flight, the other for entering personal information. Tasks often correspond to certain use cases of the system: There may be “Login to the system” and “Process order” use cases and tasks of the same names. Finally, a task may be associated with a state machine or a workflow: For example, a “Process order” task could be implemented with the “Process order” workflow in WWF. 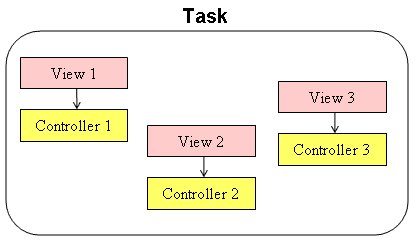 A developer should consider whether tasks can help him build his application and accordingly choose a framework with support for tasks (such as MVC# or Ingenious MVC). Generally, the more complicated an application is, the more likely it could make use of the Task concept.

You have considered the main differences between two popular architectural patterns: Model-View-Controller and Model-View-Presenter, and have learned the reasons for choosing one of them. The article shows that MVP could be a better choice for ASP.NET applications in many scenarios, and developers should certainly consider MVP frameworks as good alternatives to existing MVC solutions.