One of the advanced features of ADO.NET 2.0 you can utilize from an ASP.NET page is creating and working with strongly typed DataSets. Using the DataSet class provided by the System.Data namespace, in a typical DataSet, you might access the name of a category like this:

With strongly typed DataSets, you will be able to access your data in a much more programmer-friendly fashion:

A typed DataSet is not a built-in member of the .NET Framework. As you will discover, it is a generated class that inherits directly from the DataSet class, and allows properties and methods to be customized from an XML schema that you specify. This class also contains other classes for DataTable and DataRow objects that are enhanced in similar ways. As a result, you can create schemas and classes for data that are customized precisely for your data, enabling you to write data access code more efficiently. Do note, however, that even though your code will be up and running more quickly, you will also be burdened eventually with keeping the structures of your strongly typed DataSets up to date as your system changes.

Strongly typed DataSets are merely generic DataSets that have their columns and tables defined in advance, so the compiler already knows what they will contain. Each version of Visual Studio has made the process of strongly typing a DataSet easier, and Visual Studio 2005 has lived up to this expectation by providing an easy-to-use interface for creating and managing strongly typed DataSets. In this example, you will use the Production.Product table in the AdventureWorks database to demonstrate this feature. Simply perform the following steps: 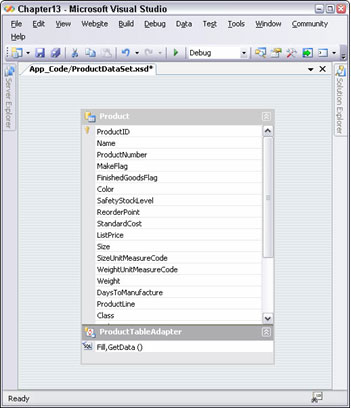 As you can see from Figure 1, for each table that is added to the designer, Visual Studio creates a strongly typed DataTable (the name is based on the original table) and a TableAdapter. The DataTable has all of its columns already defined. The table adapter is the object you will use to fill the table. By default, you have a Fill() method that will find every row from that table.

This strongly typed DataSet, as is, will return all of the records in the Product table. Since the Product table contains a lot of information, let us modify the default query to return only the products that belong to the supplied product category. To do this, right-click the ProductTableAdapter and select Add Query. Pick Use SQL statements and click the Next button. Then, choose SELECT, which returns rows, and click Next. Finally, enter the following query in the window (or use the Query Builder to accomplish the same task):

This SQL query is a simple SELECT query with an @ProductSubcategoryID parameter to narrow down the results. This will enable you to return the products that belong to the supplied category. Leaving the Fill a DataTable and Return a DataTable check boxes checked, click Finish. After adding this SELECT statement, your designer should now have an extra query added to the ProductTableAdapter, as shown in Figure 2. 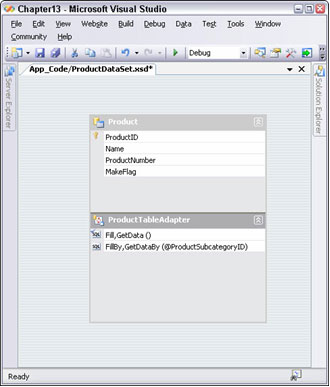 Now that you have created the strongly typed DataSet, the next step is to utilize it from an ASP.NET page.

Using the Strongly Typed DataSet in an ASP.NET Page

This code is very simple. You create an instance of the ProductTableAdapter, which you will use to fill the DataTable. Notice that instead of declaring a generic DataTable, you declare an object of type ProductDataTable. To fill this DataTable, you call the GetDataBy() method and pass it a category ID. Figure 3 illustrates the result of the above code sample. 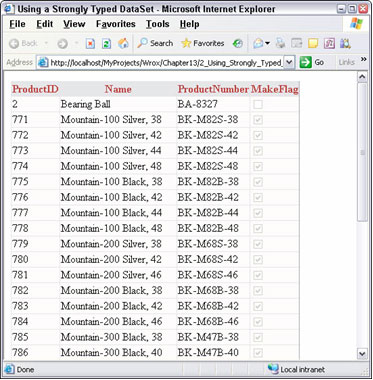 In addition to binding the results to the GridView through code, you could also use an ObjectDataSource, setting its TypeName property to ProductDataSetTableAdapters.ProductTableAdapter and its SelectMethod to GetDataBy().

There are additional methods to accomplish strong typing in your applications, outside of using strongly typed DataSets. For example, you can create custom classes that are more lightweight than DataSets and correspond exactly to your database.

So far, you have seen examples demonstrating how strongly typed DataSets make the jobs of creating and consuming DataSets far easier. Typed DataSets are easier to maintain, have strongly typed accessors, provide rigid data validation, and, because they can still be serialized, can be exposed as the return types of web service function calls.

It would be reasonable to ask, however, whether these things are any faster or slower than regular DataSets. Unfortunately, the answer is far from clear. You may already know that throwing exceptions incurs a slight overhead from the runtime, as does typecasting. All of the properties and functions in a strongly typed DataSet are wrapped in exception-handling calls, and a great many are wrapped in typecasting code. This leads some people to believe that they are slightly less efficient than standard DataSets. However, in any production application, you’ll be wrapping your DataSet in exception-handling and typecasting code anyway, so the fact that the typed DataSet does this for you should be considered an advantage and not a performance drain.

Copyright 2007 by WROX. All rights reserved. Reproduced here by permission of the publisher.

Read more
Previous articleThe Ins and Outs of Dependency Properties and Routed Events in WPF
Next articleBuilding an Employee Factory in VB.NET