Introduction to Mono for Android

The following is reprinted with permission. For more on this topic, check out Professional Android Programming with Mono for Android and .NET/C# by Wallace McClure, et al.

Introduction to Mono for Android

What’s in This Chapter?

Before You Begin Developing

Mono is an open source project sponsored by Xamarin to create an Ecma standard implementation of the .NET common language infrastructure (CLI), a C# compiler, and an open development stack. The Mono project was started by Ximian in 2001, and version 1.0 was released in 2004.

The CLI provides the runtime environment for languages that have been compiled to the Common Intermediate Language (CIL). The C# compiler is responsible for compiling C# code to CIL for execution on the runtime. The open development stack facilitates development and includes an IDE in MonoDevelop and several libraries beyond the core libraries to provide open cross-platform development. These libraries include GTK# for graphical user interface development, POSIX libraries for UNIX/Linux compatibility, Gecko libraries, database connectivity libraries, and XML schema language support via RELAX NG.

Mono adheres to the Ecma Standard. Ecma International was formed in 1961 to support the standardization of information and communication technology. In 2005, Ecma approved version 3 of C# and CLI as updates to Ecma 334 and 335. Currently, a working draft of the Ecma 335 CLI is in progress.

What Is Mono for Android?

Mono for Android is a runtime and development stack that allows .NET developers to leverage their knowledge of Visual Studio and C# to develop applications for Android-based devices.

Why Do I Need Mono for Android?

As every developer knows, learning a new development stack is time-consuming and can be painful. Mono for Android allows the .NET developer to stick with the two core tools of .NET development: Visual Studio and C#.

Staying within the .NET world allows you to work with a familiar API and library structure. Table 2.1 shows the assemblies that are a part of Mono for Android 4.0.1. 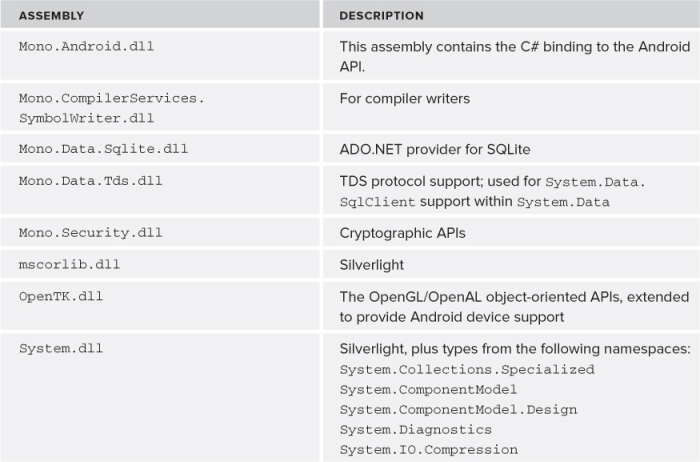 So, with your favorite development environment to leverage as well as familiar APIs, you will have a rapid start-up for Android development.

What Are the Trade-Offs of Working with Mono for Android?

When you decide not to work with a native API and development stack, trade-offs will be necessary. They need to be weighed against the advantages of working with a more comfortable, but abstract, layer.

Although moving away from the native Java and Eclipse in favor of Visual Studio has the benefits just mentioned, it also has some downsides. The first is that you generally have to wait for the latest improvements. That is, usually as soon as a new feature or performance enhancement is available in the Android SDK, you have to wait for the next release of Mono for Android for it to be available.

The second trade-off is performance. The Mono for Android runtime has to communicate with the Dalvik runtime to get a number of things done. This overhead, however, generally is minor and is more than offset by the benefits mentioned previously.

Many of the objects that are allocated by Mono for Android are wrappers for the Java objects they represent. So what happens is this: Every time you allocate a type which is wrapping a corresponding Java type, two objects are created:

Mono for Android does some work to ensure that both objects stay alive as long as one is referencing the other. That is, as long as the Mono garbage collector (GC) refers to an object, the Java-side object will be kept alive and vice versa. This is accomplished by the proxy objects that are created by the mandroid.exe tool at build time.

However, the GCs are by nature lazy, only performing a collection on demand and not simply when objects go out of scope. So that means that cross-VM garbage will stick around longer than average, and this is unavoidable.