Microsoft’s ASP.NET AJAX framework provides a solid foundation for building efficient and high performance Web-based applications that can enhance the overall end user experience. No matter how good a development platform is, however, bugs and other issues can be introduced by developers and triggered by end users. Knowing how to quickly debug ASP.NET AJAX applications can greatly increase your productivity as a developer and reduce the amount of frustration experienced while tracking down issues.

There are many tools available to you as an ASP.NET AJAX developer to efficiently debug and test your applications. For example there is debug functionality available in the ASP.NET AJAX script library that can be used to make assertions and perform tracing operations. There are several tools to intercept and view request and response messages, to more easily track down data issues and monitor AJAX request and response message sizes. This article looks at several ways to use Internet Explorer and Visual Studio to debug JavaScript. And there are also several different debugging techniques available in Firefox that can simplify the process of debugging ASP.NET AJAX applications.

Debugging JavaScript has proven to be somewhat of a challenge and has resulted in many developers resorting to “alert style” debugging to better understand how an application is working. Fortunately, Internet Explorer 6 or higher includes integrated debugging functionality that can be used to start a debug session and step through ASP.NET AJAX code with a debugging tool such as Visual Studio .NET 2005 or Microsoft’s Script Debugger, as shown in the following sections. Learning how to leverage Internet Explorer debugging features can enhance your productivity and significantly minimize the amount of time you spend hunting down bugs and other issues.

The debug capabilities in Internet Explorer 6 or higher are disabled by default but can be turned on by going to Tools–>Internet Options–>Advanced. The Advanced tab defines two items that need to be unchecked (a check means you can’t debug):

Also, check the “Display a notification about every script error” checkbox below these items so that you’re notified as errors occur in a page. If this box isn’t checked, an icon will appear in the lower-left corner of the browser; unless you click, it you may miss noting that a client-side error occurred. A side-effect of checking this checkbox is that you’ll find that many other Web sites have errors as you browse to them, so you may want to leave it unchecked when you’re not debugging your own applications.

Figure 1 shows what the Internet Explorer Advanced settings should look like to enable debugging. 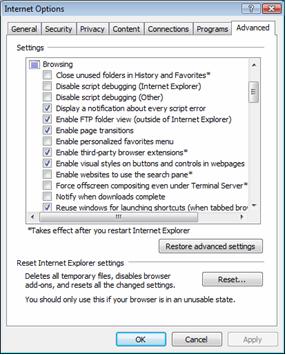 Once debugging is enabled in Internet Explorer, an ASP.NET AJAX page can be debugged using several techniques. The following sections walk you through the options. 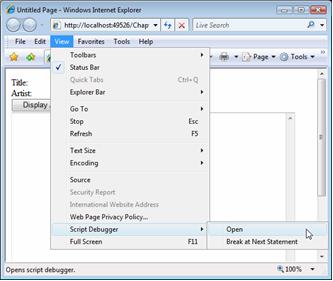 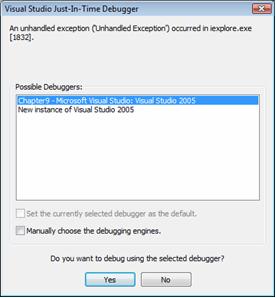 Once Visual Studio .NET is open and available for debugging, you won’t be able set a breakpoint if the script is embedded within the page. Instead, you’ll see a message at the bottom of the Visual Studio .NET status bar that states “This is not a valid location for a breakpoint” when you try to set the breakpoint. There are several ways to solve this problem. First, you can add the JavaScript “debugger” statement directly into the code where you’d like to start a debug session, which will force a breakpoint to occur at runtime at that location in your code. However, ASP.NET AJAX’s Sys.Debug class is designed for this purpose and is a more appropriate choice for debugging AJAX applications. You can call the Sys.Debug class’s fail function to trigger the debugger when a specific line of code is hit.

It’s helpful to call Sys.Debug.fail to trigger a debug session when a line of JavaScript code is executed, but you must remember to remove all these calls before moving an application to a production environment, because it will always trigger the debugger when debugging is enabled in Internet Explorer. You can have two versions of your script (Microsoft does this with its debug and release scripts) and set the appropriate ScriptMode on the ScriptManager to determine which script is loaded at runtimeruntime (as discussed in Chapter 9 “Testing and Debugging ASP.NET AJAX Applications,” of Professional ASP.NET 2.0 AJAX (Wrox, 2007, ISBN: 978-0-470-10962-5)). Although this means that your code is duplicated, the release script can have all whitespace characters stripped out of it to minimize its size, while the debug script can provide an easy-to-read script that contains the necessary calls to the Sys.Debug class for debugging, tracing, assertions and other operations.

Another option for triggering the debugger when the script is embedded in the page is to move all of the JavaScript code in the page into its own script file, instead of including it directly in the .aspx page. In this case, a separate file with an extension of .js is referenced by the page to be loaded separately at runtime, instead of being sent down to the browser along with the HTML markup. After you’ve done this you can set a breakpoint in the external script file. Figure 4 shows an example of JavaScript in a file named Listing9-12.js (available in the code download for the book, Professional ASP.NET AJAX (Wrox, 2007, ISBN: 978-0-470-10962-5), that has a breakpoint successfully set.

As you step through the code by pressing F11 (step into) or F10 (step over), you may be prompted to select the location of dynamically loaded script files needed by ASP.NET AJAX, or you may encounter an error that states “There is no source code available for the current location.” This occurs when you try to step into dynamically generated script code that was loaded using the ScriptResource.axd and WebResource.axd HTTP handlers, so in this case, there isn’t a separate physical file that Visual Studio can walk through. Although this problem can be frustrating at first, a simple tool that’s already part of Visual Studio .NET can alleviate this problem.

Visual Studio .NET 2005 SP1 helps resolve this issue: however, knowing how to deal with the error if it arises is still helpful.

Visual Studio .NET 2005 includes a very functional tool called the Script Explorer that can be used to navigate through scripts within a page. The Script Explorer can be used to load dynamic scripts in the editor so that you can step into them easily using the debugger and avoid the dreaded “There is no source code available for the current location” error. If you are prompted to load a script file, simply cancel the dialog box (or if you receive the aforementioned error, click OK). Select Debug–>Windows–>Script Explorer (or press Ctrl+Alt+N) to view the Script Explorer window. Double-click the page currently being debugged to open it in the editor, and then double-click all of the other script files shown. This will open all of the files referenced by the page in Visual Studio .NET so that the debugger can access the necessary source code to allow for a rich debugging experience.

Figure 5 shows an example of the Script Explorer and the script files used in an ASP.NET AJAX-enabled page named Listing9-12.aspx (also available in the code download for the book, Professional ASP.NET AJAX).

Stepping through code during a debug session, you may notice that as you mouse over JavaScript variables you don’t see any information or data like you do when debugging VB.NET or C# code. While you can typically use the Autos, Locals, Watch, or Immediate windows to access the variable data, you can also try highlighting the variable with the cursor and then hovering over the highlighted text with the cursor to see the data contained within the variable. This trick doesn’t work in every situation but is a good one to keep in mind.

You can also start a debug session directly in Visual Studio .NET 2005, much as you would when debugging VB.NET or C# code within an ASP.NET page. First, right-click the page you’d like to debug in the Solution Explorer and select Set As Start Page from the menu. Then press F5 or click the green play button (the button with the green arrow on it) on the debug toolbar to start Internet Explorer and display the page. Set your breakpoints in the separate script files and then trigger the breakpoints by performing the action you’d like to debug in the browser.

As you step through code, you have full access to standard debug windows such as the Autos, Locals, Watch, and Immediate, as shown in Figure 6. By using these windows, you can quickly access variable data and drill down into your applications to see what is happening internally.

Although this section focuses on debugging features in Visual Studio .NET 2005, Visual Web Developer 2005 Express also has integrated debugging features that can be used to debug ASP.NET AJAX applications. While not as full-featured as the Visual Studio .NET 2005 debugger, it does have support for the Script Explorer, Locals, and Watch windows as well as several others.

Debugging with Internet Explorer and the Microsoft Script Debugger

In cases where you don’t have access to Visual Studio .NET 2005 but need to debug ASP.NET AJAX pages and associated scripts, the Microsoft Script Debugger can be used to view and debug scripts and step through code line by line. The Script Debugger has been around for several years as a stand-alone product that can run on a variety of Microsoft operating systems, including Windows NT 4, Windows 2000, Windows Server 2003, Windows XP, and Windows Vista. It can be downloaded from http://www.microsoft.com/downloads/details.aspx?FamilyID=2f465be0-94fd-4569-b3c4-dffdf19ccd99&DisplayLang=en (this URL is, of course, subject to change). 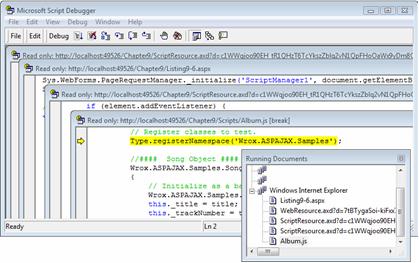 You can view all of the scripts used in the page through the Running Documents window, and you can set and remove breakpoints by placing the cursor on the line where you’d like to set (or remove) a breakpoint and then selecting the appropriate icon on the toolbar. The hand icon sets breakpoints, and the hand with a red “X” over it removes breakpoints. Scripts that are dynamically loaded in the page through ScriptResource.axd and WebResource.axd don’t present a problem and are directly accessible to step into without any extra effort on your part.

Figure 8 shows an example of the windows available in the Script Debugger.

Copyright 2007 by WROX. All rights reserved. Reproduced here by permission of the publisher.