Welcome! Today, I would like to introduce you to Code Parallelization in C#. I hope you enjoy it.

Computer software used to be written for serial computation by a serial computer. A serial computer operates internally on one bit or digit for each clock cycle. To solve a problem, an algorithm is constructed and implemented as a serial stream of instructions that are executed on a central processing unit on one computer. This means that only one instruction may execute at a given time, and only after the instruction has finished, the next instruction gets executed.

Parallel computing is a type of computation in which many calculations or the execution of processes are carried out simultaneously. Large problems get divided into smaller problems, which then get solved at the same time. There are many different forms of parallel computing, including the following: bit-level, instruction-level, data, and task parallelism.

By increasing the word size, the number of instructions the processor must execute to perform an operation on variables whose sizes are greater than the length of the word is reduced.

ILP (Instruction-level parallelism) measures how many of the instructions in a computer program can be executed simultaneously.

The two approaches to instruction level parallelism are:

Start a new C# Windows Forms project. Add a Panel and a Button to it. Name it anything descriptive, but remember, as always, my object names may differ from yours. You will be adding a ListBox dynamically through code. 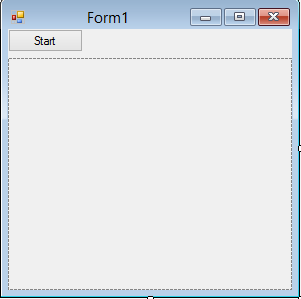 Ensure you can make use of the necessary namespaces by including them in your project:

Add the Form_Load event to create the ListBox and display it properly inside the Panel:

Add the LINQ method to calculate the PI parallel:

Add the next Parallel method:

The Parallel.For method simply executes a For loop in which iterations could run in parallel and the state of the loop can be monitored and manipulated.

Add the next parallel method, ParallelForEachRangePartitioner:

The Parallel.ForEach method executes a foreach operation on a Partitioner in which iterations are allowed to run in parallel.

Now that we have three different parallel methods, let’s do a test to see which is faster. To check the speed of each operation, you will need to make use of a StopWatch object, as follows:

This will add the PI result of each operation into the ListBox as well as the time it took to finish calculating for PI. Finally, add the Calculate Button click event: 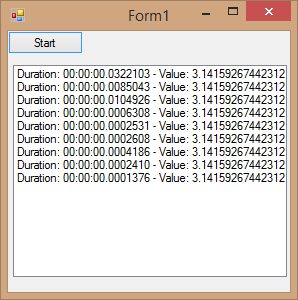 The code for this article is available on GitHub.

There are numerous ways to achieve code parallelization. Have fun exploring these and more.