Simulator for Modbus slaves over RS232/RS485 and TCP/IP amongst other protocols.

This simulator was originally written to allow the testing of a MODBUS RTU serial driver without having to get 254 little MODBUS PLCs into one office. It, however, grew and is growing to support other protocols (open-mbus TCP/IP, Allen-Bradly DF1 slave+master) as well. It is not, by any means, a full implementation of the protocol(s) implemented; For Modbus I have all the commonly used functions and some advanced ones.

This project's own homepage is now www.plcsimulator.org.

This simulator actually originated while I was trying to write a stable socket wrapper of the Windows Sockets API, and the Texas Instruments TCP/IP protocol, but that is another story. It then was re-written for Modbus RTU, and I added TCP/IP according to the OpenMBUS spec. Next, I added Allen-Bradley DF1, and have a specialized modification of a DF1 MASTER, called JOY, which is highly specific.

This program was initially written over a few weekends, and now that I no longer work much with comms., it has become a labor of love. I Still fix bugs if you explain them nicely. Although testing is difficult because I have no equipment, I even add features from time to time.

Modbus surpasses the limitations in other programs I have found in the past by:

I'm pretty sure it does compile nicely. Linking is a bit hairy if you are missing the lib-file "mylib.lib". Please download it as a separate zip file below, and compile. Then, set the linker options appropriately to point to it. Not all of this code is production code, and as such is not fully tested. Use it at your own risk.

Code updates are available in my Sourceforge subversion repository.

To get a really high score when it comes to compatibility with different devices, you want lots of functionality, but minimal code—especially if RAM is limited.

Because the source for this project is open, I imagine it will get many bug-reports and fixes at low cost, and add stability as it ages.

There are 13 new classes and a dozen useful utility routines in here.

I am not going to give a full feature and User-Interface run-down because it has built-in/linked-in help; just press F1. Here are the basics, which most of us will get in five minutes anyway.

In the words of Paul DiLascia: If this code works, it was written by Conrad Braam. If not, I don't know who wrote it.
I get lots of people asking, How do I select TCP/IP? Well, that is easy; find the drop-list control near the right, and pick TCP/IP from that. All toolbar buttons change their functions as a result.

The project got totally huge in Version 5 and I had to break it up into two parts; primarily to make maintenance easier, and make the code easier to understand. The Program together with the Utility library is too big for one CodeGuru up-load; therefore, I split it into two ZIPs, so remember to download both sources!

The library includes the following classes and functions:

Functions by Conrad Braam; here are just some of them:

Some classes and so forth in the app include: enumerate your machine's Serial ports, Easter-egg screen, also showing owner-data ListView Control using a callback; this is the only way to get display performance. Yep, there is more; I also show Alpha-blending. Right-click on the title-bar (the top blue bit), and the program will fade, allowing you to float it over other windows. If the menu does not show something like "Alpha blend," you are not running a O/S that supports that API.

Other nifty things include a scrolling credits screen in the About box, and a splash screen, as well as a very simple timed-demo/license that any programmer can work out the key for, or just mail me and I will send you a free key, or just recompile the checking away yourself!

Some thanks are also deserved to people who sent me fixes, or analysed bugs.

You may need to log in to the site to download version 8.12 from the links below. If you do not want to, but are prepared to wait until I get the request, try sending mail to my hotmail.com address, which is zaphodikus (at domain-name.com), but you may wait a day.

I have a customizable GUI now, it is not a GUI, It utilizes your browser, HTML skills required, and whatever you can throw at it... watch this space.

Another feature up-coming on the requests list is a communications logger to log all the comms message in and out to a file. 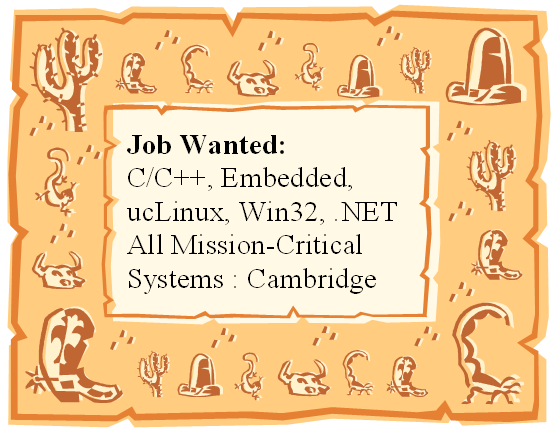 This article was originally published on October 22nd, 2003

A die-hard C++ guru, Conrad has no exciting outdoor hobbies, does not jump out of airplanes, nor look good. Studied in Elect. Engineering and disrespectful of anything that cannot be disassembled in any form (x86 was my first language). Communications is my game. Web www.plcsimulator.org CURRENTLY HUNTING FOR WORK IN CAMBRIDGE!