Recursion also can be classified into two types: Structure Recursion and Generative Recursion. The main difference between these are that Generative recursion usually decomposes the original problem into sub problems and solves it. For example, to calculate the factorial of a given number, you calculate the factorial of a number one less than the given number and keep doing this until you reach the termination condition. In the case of a binary search, you divide the given array into two pieces and run the binary search on that. In this case, you eliminate half of the elements during every recursive call until you either find the required element or reach a point where you have only one element left. Now, if that element is required, you found it at after Log2 (n) comparison (in other words, the worst case); where “n” is the total number of elements in an array.

In the previous article [5], you studied two dimensions of recursion: recursion types such as linear, tail, binary, and so forth; and whether it happens at compile time or at run time. Here, you added one more dimension in it—structure recursion and generative recursion—and now you are going to study that.

You can define this relationship with this simple block diagrams. Figure 1 is very similar to the one you have already seen in the previous article. 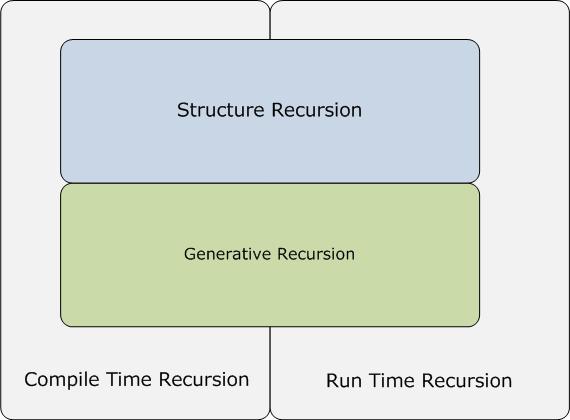 The syntax of template meta-programming is still most confusing to even an experienced C++ developer until he/she got his/her hands dirty with it a little bit. Therefore, I decided to use the same example for compile time and run time recursion for easy comparison between these two.

I decided to select the link list as an example to discuss run time and compile time structure recursion. The main reason for this is that it is very easy to implement and understand.

Here is a simple structure of a link list node. Although this node contains only one data element, it can be easily extended to store as much information as you want.

Now, you have enough tools to start playing with it. Here are a few examples of traversing a Single Link List recursively. If you look at it closely, you also can notice that all of these examples are also types of tail recursion, which you already studied in the previous article. You can even call these examples “Run time time, Structure, and Tail Recursion.”

Here is the usage of these functions: