I finally have had the time to update my article. The previous project had some memory leaks in it. Now, the game is more robust. (The application is memory leak free and the architecture of the game is more stable and to my liking.) The project name is FiveInOne (five card games included in one application package). Now, two games are implemented and can be played on a single computer or a networked environment. If conditions favor, I will make the other games available too. The application is designed in such a way that more games can be easily added.

Following is a screen shot of the “Marriage” card game. 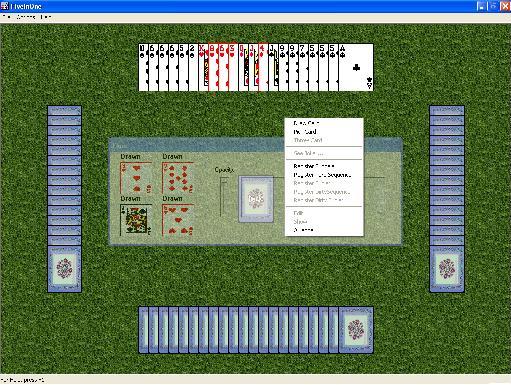 There are a total of around 65 classes (including structs) and all these classes comprise of a sizeable amount of code. But, the program is all about the interaction betweem two hierarchies of classes. One class hierarchy incorporates multiple inheritance and the other class hierarchy has CView as its base class.

This is an MFC SDI application. I do not intend the users to be able to switch games during play. The player or the user selects the appropriate game at the start of the application. After much speculation, I finally decided that I need not have Document support for my application. The main data of my application are the individual cards that are derived from CBitmapButton and stored, sorted, and manipulated using differents kinds of MFC collection classes (lists and arrays).

I am concerned about the animation aspect of the game. If you experience any problems with animation performance, please let me know. I have provided my e-mail address below.

About the “Marriage” Game

It has been popular in my home city for quite a long time. We all enjoy this game during festivals and holidays. The game I have developed is a simple version of the marriage card game. I don’t know where this game originated. But, one thing I know is that it is quite refreshing to play a hand or two of marriage.

This game is comprised of two to four players. Although six players is a possible combination, I have set the maximum number of players to four due to space limitation. The deck consists of three packs of cards. There are certain terms that I would like to clarify before you start playing this game:

Jokers: Any card can be a joker. The joker is decided at the beginning of play. Other cards that are jokers are:

Marriage: If you have a Jhiplu, a Tiplu, and a Poplu, you have a marriage. If the Jhiplu, Tiplu, and Poplu are taken as a marriage, they would not carry individual points but the marriage (that is, the set of Jhiplu, Tiplu, and Poplu) will carry the points. Two Jhiplus, two Tiplus, and two Poplus will form a double marriage. Likewise, there is also a minimal chance of a triple marriage: three Jhiplus, three Tiplus, and three Poplus.

First of all, the computer deals cards to all of the players. The joker is not set by individual players as in the usual game, but the joker is set by the computer via simply taking a random number between 1 and 52. Each player has 21 cards that he can play with. The joker can only be seen by those players who have at least three pure sequences. Note: Here, “pure sequence” means either the tunnela or the real pure sequence. The three sets of pure sequences can be two tunnelas and one pure sequence, or three tunnelas all by themselves, or one tunnela and two pure sequences, or all three pure sequences. Whatever the combination, the total number should be three. During the play, each player’s goal should be to make the maximum number of sets (three cards in a set) until all cards are finished. The set can be a pure sequence, a tunnela, a dirty sequence (two cards having the same suite and in a series and one joker), triplet, or a dirty triplet. A triplet, dirty sequence, and dirty triplet can only be made after seeing the joker. Whoever make sets of cards first wins the game.

Note: A dirty sequence can be two cards having the same suit, in a series, and one joker. One card and two jokers can also be a dirty sequence.

How the Points Are Calculated

All the jokers except the ordinary jokers carry points. The following are the possible combinations and the points carried by each combination.

The player who makes the play or, in other words, is the winner according to the first win criteria, carries no points. This is the player who collects all the points.

If a player has not made the game, and neither has he seen the joker, his points are reduced by 10.

If a player has not made the game but has seen the joker, his points are reduced by 3.

Note: In the household marriage game, there are only two Tiplus in the game because one Tiplu is set as the main joker that every player can see after he finishes three pure sequences. But in this computer version, the main joker is simply a random number between 1 and 52; therefore, there are three possible Tiplus.

Any suggestions, comments, and feedback are welcome