Image rotation isn’t as straightforward as it may appear, especially when faced with the fact that, although small, a pixel is not a point. In fact, it’s a 1 x 1 square, which leads to the question of how best to rotate it. Some algorithms will ingore this idea altogether and treat a pixel like a point. Others will do an artificial zooming on the image to make the smallest unit of color even smaller so the aliasing won’t be as evident. However, it is possible to rotate a pixel as a square, and Aarot does it. By treating a pixel like a square, you get the best rotation possible.

To learn how to perform anti-aliased image rotation, please see the companion article. 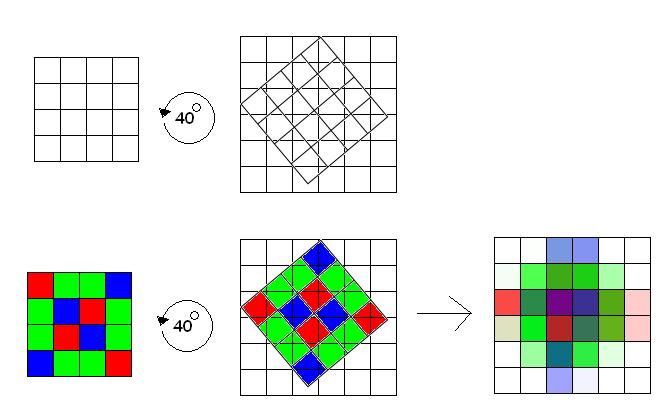 Unfortunatly, this algorithm does not complete in real time so it is not useful for games or things of the like. I wrote the algorithm for C++ and VB (C++ is faster) and provided a DLL for implementing the C++ algorithm’s speed with VB. (There are sample projects as well.)

I included a comparison between Aarot and Photoshop (CS2) so you can see the difference between the two. Here is an example of Aarot’s work:

In C++, the callback function should look like this:

If you are using the DLL in VB, your callback function should look like this:

On the other hand, if you are using the VB module, your callback should look like this (due to a need to have 16 bytes’ worth of parameters to use CallWindowProc):

where Percentage means the same thing, and Numerator and Denominator make up the rationale used to calculate Percentage.

No matter what you’re using, if your callback function returns true (anything but 0), the main algorithm will immediatly exit (after clearing the memory) and return a null bitmap.